Representing various major record labels, the RIAA filed a lawsuit against MP3Skull in 2015.

With millions of visitors per month the MP3 download site had been one of the prime sources of pirated music for a long time.

Last year a Florida federal court sided with the RIAA, awarding the labels more than $22 million in damages. In addition, it issued a permanent injunction which allowed the RIAA to take over the site’s domain names.

Despite the multi-million dollar verdict, MP3Skull continued to operate using a variety of new domain names, which were subsequently targeted by the RIAA’s legal team. As the site refused to shut down, the RIAA eventually moved up the chain targeting CDN provider Cloudflare with the permanent injunction.

The RIAA argued that Cloudflare was operating “in active concert or participation” with the pirates. Cloudflare objected and argued that the DMCA shielded the company from the broad blocking requirements. However, the court ruled that the DMCA doesn’t apply in this case, opening the door to widespread anti-piracy filtering.

The court stressed that, before issuing an injunction against Cloudflare, it still had to be determined whether the CDN provider is “in active concert or participation” with the pirate site. However, this has yet to happen. Since MP3Skull has ceased its operations the RIAA has shown little interest in pursuing the matter any further.

Cloudflare now wants the dangerous anti-piracy filtering order to be thrown out. The company submitted a motion to vacate the order late last week, arguing that the issue is moot. In fact, it has been for a while for some of the contended domain names.

The CDN provider says it researched the domain names listed in the injunction and found that only three of the twenty domains used Cloudflare’s services at the time the RIAA asked the court to clarify its order. Some had never used CloudFlare’s services at all, they say.

“Indeed, six domains – including five of the so-called ‘Active MP3Skull Domains’ in the amended injunction – had never used Cloudflare services at all. And the remaining eleven had stopped using Cloudflare before Plaintiffs brought their motion, in some cases long before Plaintiffs filed suit,” Cloudflare writes.

“Every domain Plaintiffs identified had stopped using Cloudflare by December 2016, without any independent or affirmative action by Cloudflare. Yet Plaintiffs made no effort to inform the Court of the mootness of their ’emergency’ motion in the three months before the Court issued its Order.” 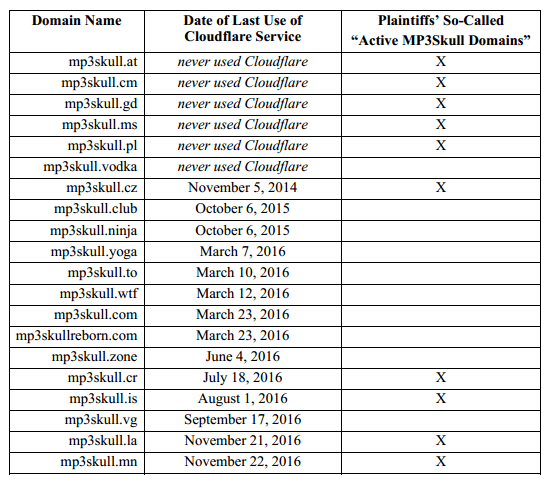 Making the matter even worse, several of the domain names listed in the injunction were owned by the record labels, when the RIAA tried to have Cloudflare block them.

“Moreover, Cloudflare’s investigation revealed that that Plaintiff Sony Music Entertainment itself owned seven of the twenty domains months as of the time Plaintiffs brought their motion, and Sony acquired one more domain shortly after.”

The latter is due to the seizure order, which was also granted by the court. However, according to Cloudflare, the RIAA failed to inform the court about these and several other changes.

“Plaintiffs did not inform the Court of the mootness of their motion against Cloudflare,” the company writes.

Since the RIAA was not entirely upfront, and the issue is no longer relevant, Cloudflare is now asking the court to vacate the order. This will push the looming piracy blocking obligations aside, which could otherwise come back to haunt the company in the future.

The RIAA has yet to reply to CloudFlare’s request, but they would likely want to keep the order in place. There’s always a tiny chance that MP3Skull might arise from the ashes, and they would want to be prepared should that be the case.