As one of the leading CDN and DDoS protection services, Cloudflare is used by millions of websites across the globe.

The company’s clients include billion dollar companies and national governments, but also personal blogs, and even pirate sites.

Copyright holders are not happy with the latter category and are pressuring Cloudflare to cut their ties with sites like The Pirate Bay, both in and out of court.

Cloudflare, however, maintains that it’s a neutral service provider. They forward copyright infringement notices to their customers, for example, but deny any liability for these sites.

Generally speaking, the company only disconnects a customer in response to a court order, as it did with Sci-Hub earlier this year. That’s why it came as a surprise when the anime torrent site NYAA.si was disconnected this week.

The site, which is a replacement for the original NYAA, has millions of users and is particularly popular in Japan. Without prior warning, it became unavailable for several hours this week, after Cloudflare removed it from its services. So what happened?

TorrentFreak spoke to the operator who said that the exact reason for the termination remains a mystery to him. He reached out to Cloudflare looking for answers, but the comany simply stated that it’s about “avoiding measures taken to avoid abuse complaints,” as can be seen below.

One of Cloudflare’s messages 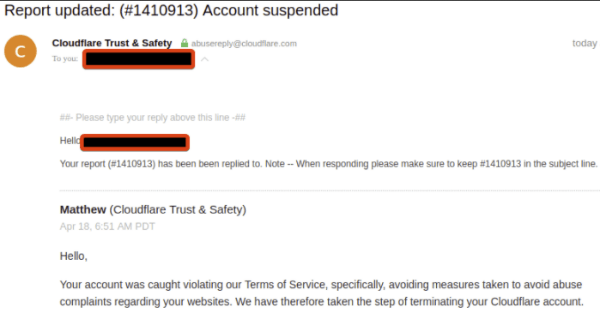 The operator says he hasn’t done anything out of the ordinary and showed his willingness to resolve any possible issues. However, that hasn’t changed Cloudflare’s stance.

“We asked multiple times for clarification. We also expressed that we were willing to attempt to work with them on whatever the problem actually was, if they would explain what they even mean.

“Naturally, I have been stonewalled by them at every stage. I’ve contacted numerous persons at Cloudflare and nobody will talk about this,” NYAA’s operator adds.

TorrentFreak asked Cloudflare for more details and the company confirmed that the matter was related to interference with its abuse reporting systems, without providing further detail.

“We determined that the customer had taken steps specifically intended to interfere with and thwart the operation of our abuse reporting systems,” Cloudflare’s General Counsel Doug Kramer informed us.

Cloudflare’s statement suggests that the site took active steps to interfere with the abuse process. The company added that it can’t go into detail, but says that the reason for the termination was shared with the website owner.

The website owner, on the other hand, informs us that he has no clue what the exact problem is. NYAA.si occasionally swaps IP addresses and have recently set up some mirror domains, but these were all under the same account. So, he has no idea why that would interfere with any abuse reports.

“I’m honestly unsure of what we could have done that ‘circumvents” their abuse system,” NYAA’s operator says, adding that the only abuse reports received were copyright related.

It’s unlikely, however, that copyright takedown notices alone would warrant account termination, as most of the largest torrent sites use Cloudflare.

NYAA’s operator says he can do little more than speculate at the point. Some have hinted at a secret court order while Japan’s recent crackdown on manga and anime piracy also came to mind, all without a grain of evidence of course.

Whatever the reason, NYAA.si now has to move on without Cloudflare, while the mystery remains.

“Frankly, this whole thing is a joke. I don’t understand why they would willingly host much bigger sites like ThePirateBay without any issue, or even ISIS, or the various hacking groups that have used them over time,” the operator says.

If more information about the abuse process interfere becomes available, we’ll definitely follow it up.