Website blocking has become one of the go-to methods for reducing online copyright infringement.

In addition to court-ordered blockades, various commercial vendors also offer a broad range of blocking tools. This includes Comodo, which offers a free DNS service that keeps people away from dangerous sites.

The service labeled SecureDNS is part of the Comodo Internet Security bundle but can be used by the general public as well, without charge. Just change the DNS settings on your computer or any other device, and you’re ready to go.

“As a leading provider of computer security solutions, Comodo is keenly aware of the dangers that plague the Internet today. SecureDNS helps users keep safe online with its malware domain filtering feature,” the company explains.

Aside from malware and spyware, Comodo also blocks access to sites that offer access to pirated content. Or put differently, they try to do this. But it’s easier said than done.

“This website has been blocked temporarily because of the following reason(s): Hacking/Warez: Site may offer illegal sharing of copyrighted software or media,” the warning reads, adding that several users also reported the site to be unsafe. 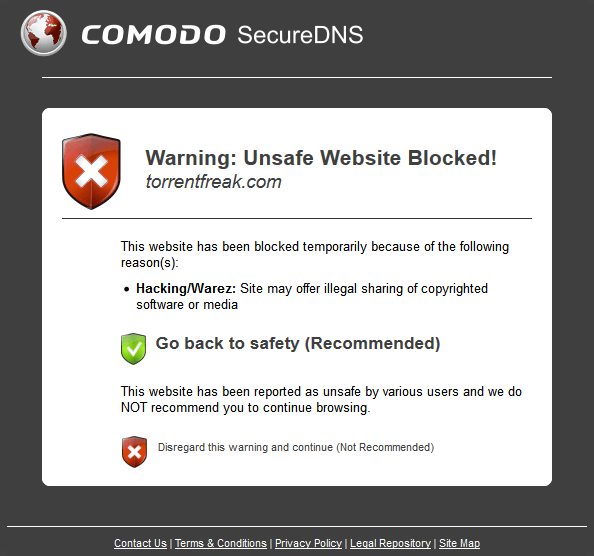 People can still access the site by clicking on a big red cross, although that’s something Comodo doesn’t recommend. However, it is quite clear that new readers will be pretty spooked by the alarming message.

We assume that TorrentFreak was added to Comodo’s blocklist by mistake. And while mistakes can happen everywhere, this once again show that overblocking is a serious concern.

We are lucky enough that readers alerted us to the problem, but in other cases, it could easily go unnoticed.

Interestingly, the ‘piracy’ blocklist is not as stringent as the above would suggest. While we replicated the issue, we also checked several other known ‘pirate’ sites including The Pirate Bay, RARBG, GoMovies, and Pubfilm. These could all be accessed through SecureDNS without any warning.

TorrentFreak contacted Comodo today for a comment on their curious blocking efforts and we’ll update the article if we hear back from the company. In the meantime, Comodo SecureDNS users may want to consider switching to a more open DNS provider.

Update June 19: Comodo hasn’t replied yet, but they have just unblocked us.