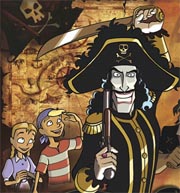 Early September the Oslo District Court followed in the footsteps of other courts around Europe by ordering local ISPs to block several pirate sites.

While ISPs are yet to fully implement the international headline-grabbing blockade, it appears that the message that these sites are effectively banned hasn’t reached some prominent advertisers.

For example, in what is likely to be an embarrassment to local authorities, during the past few days adverts for NSB, the Norwegian government-owned national railway system, have been appearing on prominent unauthorized streaming portal PrimeWire.

Furthermore, ads for Norway’s leading tourist attraction, the Kristiansand Zoo and Amusement Park, have also being appearing on the popular and soon-to-be-blocked site.

Interestingly enough they feature a character known as Captain Sabertooth. The star of the most expensive children’s movie in Norwegian history, Sabertooth is also the country’s most famous pirate and the centerpiece of kids’ TV series, stage plays and books.

“Illegal websites earn big money from advertising. This is not good at all,” the anti-piracy chief says.

“The media agencies around Europe are spreading ads to hit a certain number of people, without looking at where they’re placing them. In this respect media agencies need to sharpen their approach.”

The revelations are also proving a disappointment to the companies whose ads appeared on PrimeWire.

Annie B. Schjøtt, Sales and Marketing Manager at Kristiansand Zoo and Amusement Park, says it was never their intention to place ads on pirate sites.

“We totally renounce such [pirate] sites. We are a cultural operation ourselves, and we absolutely did not want to be involved in supporting people who copy other people’s work,” Schjøtt says.

A communications manager at government-owned railway company NSB described the situation as “regrettable.”

While no one is suggesting that the companies deliberately targeted pirate sites, somehow their advertising spend is being funneled to sites that have been deemed to operate illegally. So how did they get there? Apparently that’s the indirect responsibility of Carat, the media agency which handled the ads.

Digital Strategy Director Erik Solberg says that the ads were placed through an intermediary but the company is working hard to ensure there are no more embarrassments.

“We can only deplore this. We have closed all the activity of the subcontractor in the network,” Solberg explains. “We are working diligently to make sure this does not happen again. The supplier is a major international advertising network.”

“It appears that advertisers’ logos, trademarks and advertisements – often without the advertiser’s knowledge – are ending up on illegal sites,” said Swedish Advertisers legal advisor Tobias Eltell.

“It may be a question of sites that provide video, images, text and music without the rights holders’ consent. For serious advertisers, this may become a huge problem and therefore Swedish Advertisers have developed recommendations that may be helpful for advertisers.”

The guidelines (Swedish) include observing good ethics, boycotting advertising contracts that include bulk sales, and insisting that ads are not only targeted at a specific audience at a certain price, but also determining where those ads are ultimately placed.