Before getting hired by Google back in 2010, lawyer Fred von Lohmann was a senior attorney at the EFF dealing with intellectual property matters.

In March 2018, after serving as Google’s legal director for copyright issues, von Lohmann left the company, having fought many battles in favor of Google’s right to use third-party content on its services.

This led to Google advertising for a new Head of Copyright, highlighting all the great qualities a candidate must possess to qualify for such a lofty position. While it’s unclear if the role has been filled, the posting has since been removed – but not before pro-copyright group CreativeFuture got its hands on it.

The coalition, which claims to represent more than 520 companies and organizations and over 160,000 creative individuals, published a “corrected” version this week, in which it highlights the qualities it believes a person will need to get the job. It pulls no punches.

“Following a thorough analysis by our in-house team of creativity defenders, we at CreativeFuture have determined that certain key details of the posting may be in need of revision – so as to present a more accurate portrayal of what the position truly entails,” CreativeFuture begins.

“We have taken the liberty of making these edits for you, presented below as red-lined corrections to the original document. Though the job posting has since been closed online, we trust you will make whomever steps into the role aware of the suggested changes, so that they may conduct their work with Google’s usual high regard for creative professionals and the security of their works in the digital space.”

In case it’s not entirely obvious already, that’s a pretty sarcastic hors d’oeuvre. The main course, resplendent in its bright red edits, fills up the consumer with anti-Google rhetoric so rich, there’s no room left for dessert. 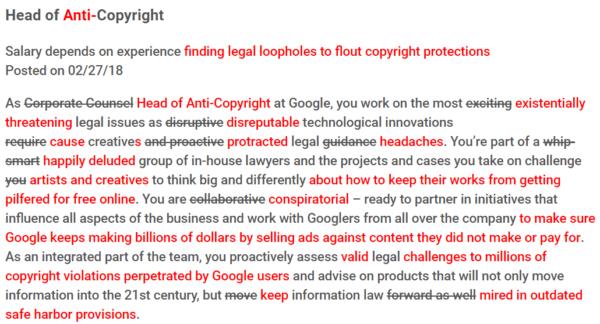 The full ‘revised’ posting, which can be found here, goes on to accuse Google of manipulating Members of Congress, conspiracy, nurturing a corrosive business, evading liability, failing to implement a repeat infringer policy, and displaying a “willingness to turn a blind eye to pirated content being uploaded to [its] servers on an overwhelming scale.”

Finally, CreativeFuture determines that the successful candidate for Head of Anti-Copyright should have “strong bullshitting skills”, “low self-respect,” and “questionable judgment.” Oh, and a passion for playing Whack-a-Mole.

It’s worth reiterating that CreativeFuture speaks for dozens of industry giants. All the big Hollywood and TV studios are involved, not to mention companies like Warner Music Group and even Microsoft. Of course, they’re entitled to argue as passionately as they see fit, but one has to go back a long way to find this level of bitterness in the copyright wars.

Indeed, this brand of half-joking-yet-serious insult approach hasn’t been seen since Anakata of the Pirate Bay demanded the strategic placement of a retractable baton inside a person of importance at Dreamworks. It’s a real surprise that we’re back on that level again many years later, not least since it’s now billion dollar companies hurling the insults.

While this is clearly a great time to be alive, something is missing from this battle of the barbs. Google, it seems, doesn’t want to get sucked in.

Every single day the company finds itself lambasted over its supposed anti-copyright practices but until now has managed to avoid rolling round in the mud with its accusers. That’s a real shame, not least since public shit-flinging contests on this scale tend to get a lot of views on YouTube, if both sides can be bothered to put in the effort. Ask Logan Paul and KSI.

If a public conflict does indeed come to pass, there’s always the option of monetization. YouTube might not pay the going rate but it’s better than the big fat nothing being offered by Twitter, where most of the war drums are being banged at the moment.