Cyberlocker Traffic Plummets, But Not Mega

In the file-sharing world sites tend to be split into two camps – those that facilitate access to content held elsewhere (torrent sites) and those that host the content themselves.

What to call the sites in this latter category largely depends on the context. The generic “file-hoster” monicker works well for all, but the more recent term “cyberlocker” has somehow become associated with sites that have some kind of “rogue” business model attached.

Last September, Netnames produced a report about ‘cyberlockers’ and annoyed the operators of Mega.co.nz by categorizing the site as some kind of illicit operation. This week, only adding to the controversy, Mega revealed that U.S. government pressure had led to PayPal withdrawing its services from the company.

This week, several months after the publication of the NetNames report, we decided to take a look at how the file-hosting sites listed have been doing on the traffic front. According to Alexa they are mostly on a significant downward trend, but as we shall see that’s not universally the case. In fact, Mega appears to be doing particularly well.

All of the sites in this section lost significant overall traffic during 2014 and early 2015. 4shared, Zippyshare, Turbobit, BitShare, LetitBit, FreakShare, 1fichier and 2shared all had big downward trends and, as illustrated by the charts below, October time seems to mark the beginning of most of the bad news. 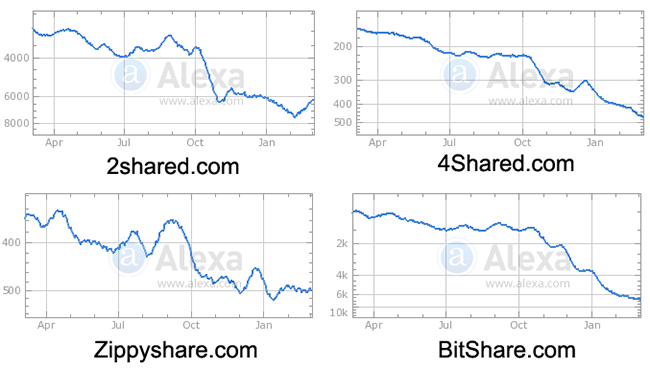 That date closely coincides with Google’s downranking of sites for which it receives the most infringement notices. The change hit many major torrent sites causing immediate drops in traffic, but for others the change only seems to have brought good news.

Mega.co.nz, a site included in the NetNames report but not indexed by Google due to the site’s own restrictions, appears to have reaped rewards where others have failed. Following a slump in the summer of 2014, the period since October 2014 has been nothing but a success story for the Kim Dotcom-founded operation.

Another site bucking the downward trend is UptoBox, a site which NetNames claims has around six million monthly users and $1.7 million in annual revenues. Despite Google receiving close to 368,000 complaints about the site, UpToBox has been doing better than ever since October 2014 when most of the other sites started to suffer. Only a small slump in January 2015 spoiled the party.

RapidGator is one of the most popular file-hosting sites around but had a bit of a disappointing 2014. After starting the year strongly as one of the 500 most popular sites in the world, the site embarked on a steady downward trend and like most it took a big hit at the start of October when Google’s down-ranking began.

Between then and the end of 2014 it regained traffic to position itself where it had been during the summer. But in January came a new slump which took the site back down to its lowest traffic levels to date.

Another site on a general downward trend is Uploaded.net, but again the site’s traffic demonstrates some interesting features. After taking a big hit in October the site recovered somewhat, only to peak and begin dropping off again.

It’s fair to say that the majority of the big sites in the NetNames report are on a downward trend but sites like Mega are clearly able to buck the trend. Whether that’s due to the company’s charismatic founder, its end-to-end encryption or simply by being a good provider with a great service is up for debate. Nevertheless, an ability to avoid Google downranking punishments is certainly a plus and one that the company will be keen to maintain.