Movie studio Voltage is no stranger to suing BitTorrent users.

The company has pioneered mass-BitTorrent lawsuits in the United States and is estimated to have made a lot of money doing so.

Most recently it has filed lawsuits against alleged downloaders of Dallas Buyers Club. The first lawsuits were filed on behalf of Voltage, and this week they were followed by two mass-BitTorrent suits “Dallas Buyers Club, LLC” filed with an Illinois federal court.

The two lawsuits target 107 individuals who allegedly shared a pirated copy of the film from their home connections late January. While most of the language in the complaint is standard, the filmmakers appear to have waited for the Academy Awards, as the recent Oscar wins are prominently featured.

In addition to the two Oscars, the makers also mention the Golden Globes and several other awards the Dallas buyers Club has won recently, stressing that the film “has significant value” 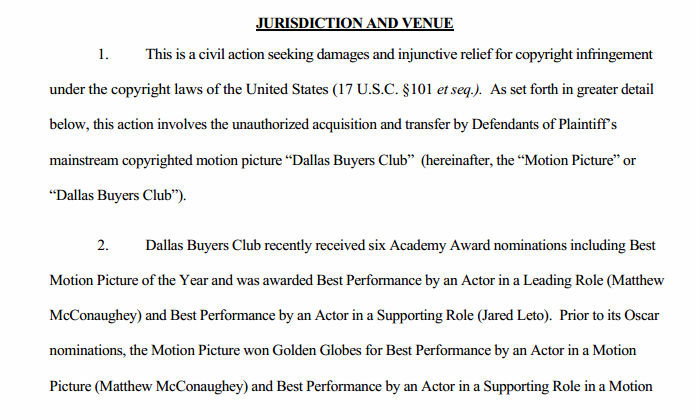 TF reached out the Dallas Buyers Club’s lawyers to ask if more lawsuits are queued up but we haven’t received a response thus far.

As with all other mass-BitTorrent lawsuits the end game is not a full trial, but to reveal the identities of the alleged downloaders so they can be encouraged to settle. To accomplish this the movie studio asked the court to grant a subpoena so they can order associated ISPs to give up their customers’ details.

The cased filed in Illinois this week almost exclusively targets Comcast subscribers. For defendants who are named later on, it’s wise to contact an attorney. Alternatively, DTD points out that there is a standard template that can be used to respond to the accusation.

The current defendants all downloaded the movie before it won the Oscars. However, it’s worth noting that the number of active downloaders of Dallas Buyers Club quadrupled the day after the Academy awards, resulting in roughly 100,000 extra downloads.

Even today Dallas Buyers Club is still downloaded by tends of thousands of people, which means that the pool of potential targets for these lawsuits is far from exhausted.