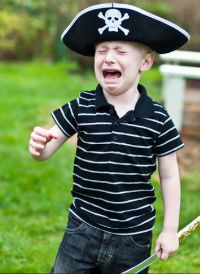 While there are plenty of people who just want content for free, digging through the last 35 years of piracy reveals an interesting trend. One way or another, people have always secretly admired anti-piracy systems, since they simultaneously relish the prospect of one day subverting their barriers.

In the very early 80s, when the first 8-bit home computers became more readily available, finding ways to pirate games was almost as much fun as playing them. Children, with limited pocket money, would pool their resources and buy a single copy of a cassette-based game, hoping to clone it at home with a twin-deck recorder, to share among their fellow investors.

With significant trial and error (and only pre-Internet schoolyard advice and folklore available) copying eventually became easy. Then the ‘evil’ games companies worked out what was going on and decided to do something about it.

Early protection systems, such as ‘Hyper Loaders‘, threw a wrench in the works for a while but along came software like Lerm (with full page ads in the media) to level the playing field. Anything you can do we can do better, those kids rejoiced.

Unsurprisingly, copiers like Lerm also fell victim to pirates, with all self-respecting red beards owning a copy. But then the next waves of anti-piracy systems would come along, ensuring that working out how to pirate games became a time-consuming hobby in itself. But most pirates were kids – what else did they have to do?

With a young and inexperienced mindset, however, it was sometimes easy to fear that like Denuvo a year or two ago, some things might never be copied. Take the 1983 release of International Soccer for the Commodore 64 home computer, for example. That originally came on a cartridge – who could ever copy one of those?

Of course, someone did, dumping it onto cassette tape complete with a modification that had some players sitting in wheelchairs, others on crutches, instead of running around. By today’s standards that’s both technically trivial and rather insensitive, but at the time it represented a pirate double-whammy.

A game that couldn’t be pirated getting pirated onto another format, plus a ridiculous addition that no game company would ever allow to market? To teenage pirates, that was a supremely delicious not to mention rebellious treat.

As the months and years rolled on, new consoles – such as Commodore’s Amiga – brought 3.5″ floppy disc storage and new copy protection mechanisms to the masses. And, as expected, fresh solutions to thwart them came to market. Tools such as X-Copy Pro went down in history and were universally hailed by pirates. Who immediately pirated them, of course.

Today the situation is somewhat different but somehow just the same. Copy protection mechanisms, such as the now-infamous Denuvo, are so complex that no user-operated tool is available to copy the games protected by it. Yet people, driven by a passion for subverting the system and solving technological puzzles, are dedicating thousands of hours to take them apart.

Just recently, Denuvo was well and truly dismantled. Games are now routinely getting cracked in a day, sometimes just hours, and the excitement in the air is palpable. In many ways, this is the same kind of enthusiasm expressed by the relatively naive kid pirates of the 80s. They too were frustrated by copy protection, they too screamed with glee when it fell from grace.

While gaming has always been fun, the sense of achievement – of subverting the system – has always come a close second to actually playing games for those with an enthusiastic pirate streak. Imagine a world where every game could be easily copied by just about anyone. Now compare that to a war of attrition against the dark forces behind 80s Hyper Loaders and the evil Denuvo of today.

In the end, there’s no doubt. Most dedicated pirates, provided they eventually taste victory, will take the warfare option any day, fighting to the end, fighting for victory.

Let’s be honest. Pirates absolutely need a nemesis like Denuvo. Because – quite simply – it’s only half the fun without one.