The DMCA gives rightsholders a mechanism through which they can have content, or links to content, removed from the Internet if they infringe their copyrights.

Google alone receives millions of these kinds of requests every year and to be fair a majority appear to play by the rules.

However, the system – or rather the way it is being played – is clumsy. Every week we’re seeing wrongful takedowns including those designed to hurt free speech, stifle dissenting voices, and some that are just overly aggressive and totally blind to the collateral damage they can cause.

Today we see a DMCA takedown that fits squarely in the latter category. It involves the publisher Pearson and the operator of WordPress information resource WPMU DEV and Edublogs, described as “the oldest and second largest WordPress Multisite setup on the web.”

According to the company’s stats, Edublogs have more than than 1,451,000 teacher and student blogs online but last week, due to DMCA action by Pearson and a massive overreaction by Edublog’s server host ServerBeach, every single one of them was taken offline.

The problem? Five years ago an Edublog user called “Clive” published a copy of the Becks Hopelessness Scale, a product to which Pearson owns the copyright.

“One of our teachers, in 2007, had shared a copy of Beck’s Hopelessness Scale with his class, a 20 question list, totaling some 279 words, published in 1974, that Pearson would like you to pay $120 for,” Edublogs founder and CEO James Farmer explains.

However, instead of simply contacting Edublogs with their takedown notice, Pearson contacted ServerBeach instead. This tactic, of contacting hosts of websites instead of the sites themselves, is becoming more widespread. A developing strategy of anti-piracy companies is to cause as much aggravation as possible with their takedown notices to make hosting difficult for anyone deemed to be an infringer.

Whether Pearson follow this strategy is unknown, but if they wanted to cause a lot of trouble with this notice it definitely worked, despite Edublogs complying with the notice.

“So we looked at [the ‘infringing’ blog], figured that whether or not we liked it Pearson were probably correct about it, and as it hadn’t been used in the last 5 years ’splogged’ the site so that the content was no longer available and informed ServerBeach,” says Farmer.

However, Farmer says that ServerBeach detected that the offending blog was still in the Edublogs web cache, and even though it was inaccessible to the public, responded with the following notice: 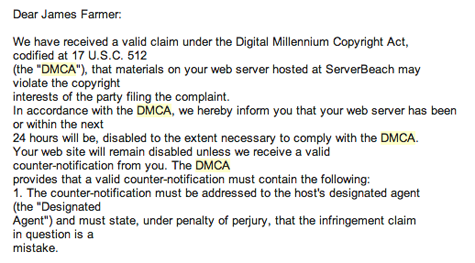 A few hours later ServerBeach took action, not to shut down just the offending blog, but to take the whole Edublogs operation offline, a total of more than 1.45 million blogs. That’s a huge number of people affected, even if each blog has just a single reader.

The blogs were eventually restored but now there is some debate over who said what to who and when. Farmer says that ServerBeach now inform him that they tried to contact Edublogs 10 days earlier via an automated system, but Farmer denies they received anything.

Communications can go astray, these things happen all the time in business, that is to be expected. But what we have here is hosting providers such as ServerBeach living in what they perceive as a climate of fear – if they don’t disable access to infringing content in a timely manner they will held liable for it.

And that may indeed be the case, but what these companies also have to appreciate is where their revenue is coming from. Edublogs spend $6,954.37 every month to host their site with ServerBeach, and that doesn’t warrant so much as a phone call before they pull the plug?

Earlier today Ross Hudgens at Edublogs told TorrentFreak that the company would “love to get more visibility for stuff like this so it hopefully doesn’t happen again.”

But, sadly, it will.

Anti-piracy companies will continue to take the direct enforcement route to webhosts in the United States and they will continue to panic. What those hosts need to do is not only stand up for themselves but engage in basic human-to-human customer service. Above all, they should never forget who pays the bills.