Lately we’ve seen quite a few new sites that let you download torrents to their servers. Not just the traditional seedbox providers, but also services such as those from Imageshack and Torrent-Relay. Instant-Torrents is another ‘torrent download’ service, but with some distinctive features that set it apart from the rest.

Like the other sites we mentioned, Instant-Torrents downloads the torrents to their servers. When the download is finished, users can download it to their computer. What’s different is that once a torrent is downloaded to Instant-Torrent, it will stay hosted on the server, and other users can find the files via the site’s search, and download them instantly.

Instant-Torrents is still low on content, but with enough users it will become unnecessary to add torrents by yourself, since most popular files will be hosted on the server anyway. The downside for the owners is of course that the MPAA, IFPI and RIAA will be keeping an eye on it as well.

Instant-Torrents shares all torrents till they have uploaded what they have downloaded, which makes it ‘share friendly’. Users are allowed to have 5 torrents running at the same time, and there is no limit in size or numbers for completed torrents. “As long as there’s enough disk space, people can download as much as they want,” ‘Zero Endorphine’, one of the Instant-Torrents co-founders told us. 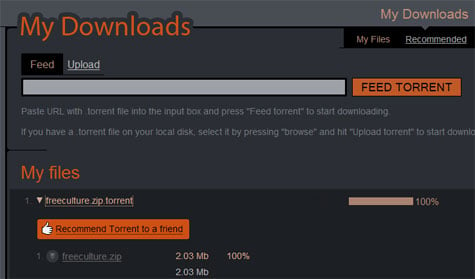 The service also has an option to make a watch list, to downloads torrents based on specific keywords, as soon as they are available. In addition, the site has lists of the last added, most downloaded and most recommended torrents, and it allows users to recommend torrents to their friends.

Instant-Torrents is itself a free service, but in order to download you’ll have to get a VPN account at Ivacy. This is because the files can only be downloaded to your PC if you’re connected to the (private) Ivacy network. There is a free 1GB trial available, so potential users can play around with it for free. A paid account costs 0.50 Euro ($0.70) per GB, or 10 Euro ($14.20) a month for unlimited bandwidth.

‘Zero Endorphine’, one of the Instant-Torrents co-founders told us that they get a revenue share from Ivacy, to cover the expenses they incur, such as bandwidth and server costs. The site has only been up and running for a few weeks, and ‘Zero Endorphine’ ensured us that they will add more innovative features in the near future.

“We already added Usenet support, in a few days we will support Rapidshare downloads as well, and we’re also working on integrated BitTorrent tracker search,” ‘Zero Endorphine’ said. Instant-Torrents offers an interesting addition to the most basic BitTorrent download services. Although we prefer BitTorrent to be free, the private nature of the site, and the instant downloads might make it worthwhile for some.