Downloading MP3s From Spotify is Easy – But Feels Dated

These days there are essentially two ways to obtain music on-demand. One can buy MP3s from places like iTunes or for those looking to make their pennies stretch further, streaming solutions like Spotify are just what the doctor ordered.

Services that allow users to download MP3s are more expensive than streaming options and no wonder. Offline listening features notwithstanding, streaming is somewhat transient. Like a diamond, an MP3 is forever.

No surprise then that Spotify users squealed with excitement back in March 2013 when a new Chrome extension hit the web. Downloadify by Robin Aldenhoven allowed Spotify users to permanently download MP3s to their devices from the Spotify web interface, a move that sparked a frenzy of people doing just that.

Now, three years on, it appears that downloading MP3s from Spotify is a thing again. This time around it’s not quite as easy as installing a simple extension but for those with a PC and a modicum of patience it shouldn’t prove too much of a problem.

The original code for the aptly named Spotify Playlist Downloader (SPD) was created by Lordmau5 and has been kicking around for a few weeks. Given a few parameters it happily dumps playlists full of 160 kbps MP3s to the host machine in seconds and names them nicely too.

However, SPD requires people to fiddle around using a command line, something the majority simply can’t be bothered with. So, what SPD needed was for someone to come along and augment it with a nice Windows GUI to make the whole thing more user-friendly. 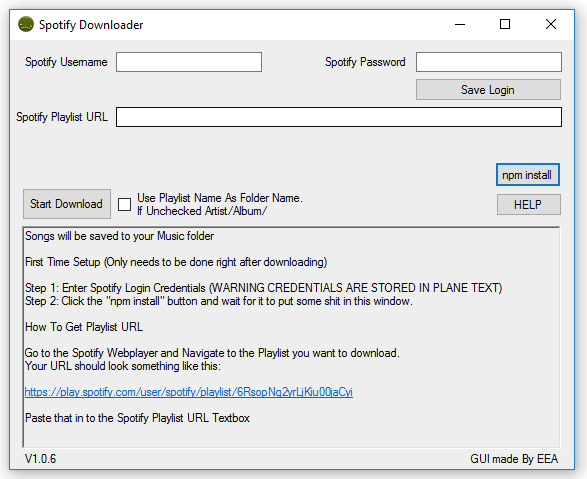 Admittedly it’s a bit clunky but it definitely works and does so with both premium and even free Spotify accounts. There are reports that free accounts can seize up after vigorous SPD use but eventually they begin to work again although no one seems to know why.

So with tens of millions of tracks now available to anyone with a PC, one might expect there are celebrations to be had. Indeed, in some quarters they’re probably going on right now.

But without the whole Spotify package, complete with recommendations, superb music discovery opportunities and a beautiful interface, the hand stacking, sorting and categorizing of MP3s feels somewhat primitive. Sure, the tracks come at a bargain price, but using them seems like a step back in time.

There’s little doubt that sooner or later Spotify will plug the hole exploited by SPD but in the meantime thousands of people will be greedily filling their hard drives with MP3s. For some it will entail grabbing some treasured classics but for others it will mean revisiting a life filled with soulless Windows Explorer folders that lead first to excitement and then musical dead ends.

Everyone knows that forbidden fruit is alluring but sometimes the realization dawns that while it’s definitely exciting, it’s not necessarily more tasty.