Later this month, Members of the European Parliament will cast their final vote on the EU Copyright Directive.

This includes the controversial Article 13 which is praised or condemned, depending on which side you’re on.

With just days to go, both camps are doing all they can to have their voices heard. Various rightsholder groups are calling on the public to support the livelihoods of artists and creators, for example. On the other hand, opponents are organizing protests, both on and offline.

Interestingly, the European Commission and Parliament also got involved, both with a clear pro Article 13 stance. The Commission started mid-February by referring to opponents of the proposed legislation as a “Mob.” This article was later deleted, as it was apparently “misunderstood” by the public at large.

“The video says a lighter regime applies to platforms that have a turnover below 10 Million *or* less than 5 million unique visitors. This is just wrong. Actually, the lighter regime only applies if both criteria are met, and platforms are also younger than 3 years old.”

Your memes are safe ?
Freedom of expression is not affected ?
It's all about fair payment to content creators ?

Watch to learn more about the #copyrightdirective ? pic.twitter.com/ztYzrl4sdH

These errors only served to rile up the “mob” of opponents, instead of convincing them that all was fine. While that was enough reason for concern already, things took a turn for the worse yesterday. At least, from a PR perspective.

Reda decided to use her privileges as an MEP to look into the origin of the video. She found out that it wasn’t created by the European Parliament itself but was outsourced to a third-party contractor, Agence France-Presse (AFP).

This isn’t unusual in itself. External contractors are used all the time and AFP is a reputable news agency. However, in this case, it certainly looks bad, as the same organization was the driving force behind a pro Article 11 lobbying campaign last September.

“The video by the European Parliament to inform the public about the Copyright Directive was made by an organization which has a massive conflict of interest,” says Reda, summarizing her findings.

Even if all the wording in the video came directly from Parliament, involving a third-party stakeholder doesn’t look good PR-wise. Especially when the video itself is highly controversial and in part misleading.

In all fairness, there has also been plenty of misinformation from some opponents of Article 13. There are always extremes on both sides. Ideally, however, the European Parliament should remain as objective as possible, at least until the final votes are cast.

With its video, the European Parliament only riled up the opposition, something which runs completely counter to its intentions.

In the past Rieck has frequently accused US tech companies of funding Article 13 opposition, describing it as an assault on politics.  This belief was strengthened by a study which looked at the location of people who Tweeted in opposition of the Copyright Directive, including the  #saveyourinternet tag.

From the report (now removed) 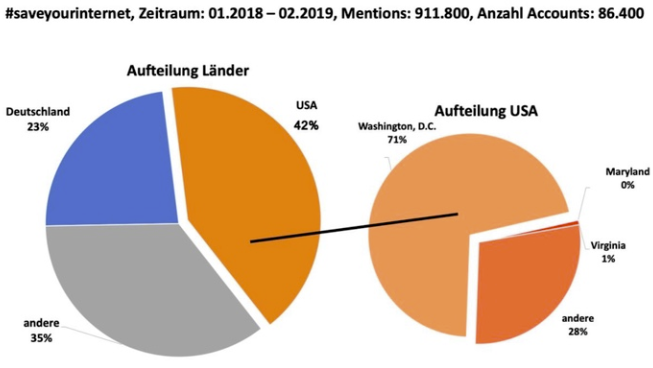 These findings, which led to the suggestion that US corporate interests are influencing EU politics, were shared in a letter to Members of the EU Parliament. However, soon after it was sent it became apparent that the data is far from perfect.

It turns out that Talkwalker attributes tweets to Washington DC when the user doesn’t share his or her location. This explains why the tweets of Julia Reda and others ‘appeared’ to come from the US, when they were clearly not.

While there is no sign of any deliberate intent to mislead in this instance, the whole episode was rather unfortunate. And again, it only added fuel to the fire for those who are staunchly against Article 13. After being branded a ‘mob’ they were now branded as ‘bots.’

This inspired some people to take their protests to the streets. In Berlin, Germany, people protested at the headquarters of the CDU party this week, shouting  “We are no bots!” And they certainly didn’t travel all the way from Washington DC.

During the weeks to come there are more offline demonstrations planned throughout Europe, mostly Germany.

Responding to questions from the public on Reddit, Julia Reda called on people from other countries to get involved as well. These demonstrations make a bigger impact than writing to MEPs or tweeting a message.

“This is the most powerful proof that people really do care about it, and it has led many MEPs to change their minds. But we can’t win this vote with protests in Germany alone, they need to spread to other countries,” Reda said.

Those in favor of Article 13 are not sitting still either and are continuing to both lobby and protest.

Whether it’s wise for the European Parliament to get actively involved any further is doubtful. The video has shown that such efforts are not going to convince those who have made up their mind. On the contrary, in this case, it completely backfired.