For several years politicians have debated on how Europe should approach net neutrality.

The results of these negotiations are included in the Telecoms Single Market (TSM) regulation, which will be voted on early next week.

If the European Parliament adopts the new rules they will become law, replacing existing network neutrality laws in member states of the EU.

This is a positive development for net neutrality supporters in countries where legislation is lacking, but not necessarily in the Netherlands, Slovenia and Norway, which already have strong rules in place.

Various activist groups and experts warn that there won’t be any real network neutrality if some crucial amendments fail to pass. These amendments will ensure that specific types of traffic aren’t throttled around the clock, for example.

The current language would allow ISPs to throttle BitTorrent traffic permanently if that would optimize overall “transmission quality.” This is not a far-fetched argument, since torrent traffic can be quite demanding on a network.

Barbara van Schewick, Professor of Law and Director of Stanford Law School’s Center for Internet and Society, tells us that in its current form the net neutrality regulations pose a significant threat to file-sharing protocols and services.

“This is a real problem for P2P applications. ISPs regularly throttle or otherwise interfere with peer-to-peer file-sharing applications to manage congestion if they are not prevented from doing so by network neutrality rules,” van Schewick says.

“The provisions would allow ISPs to throttle or de-prioritize P2P file-sharing around the clock based on the ‘objective technical requirement’ that P2P file-sharing is not sensitive to delay,” she adds.

This would lead to lower download speeds for average downloaders, for example. In addition, it would be troubling for P2P and BitTorrent-based real-time streaming services which are particularly sensitive to delays.

Since encrypted traffic can’t be classified though deep packet inspection, ISPs may choose to de-prioritize it altogether.

“Encryption makes it impossible to identify the type of application, so ISPs who implement that kind of traffic management have generally put encrypted traffic in the slow lane,” van Schewick explains.

“Even if an ISP wasn’t specifically targeting P2P file-sharing applications, this would hurt all P2P applications that encrypt their traffic,” she adds.

The concerns outlined above are shared by several Members of Parliament who have introduced amendments to fix the issues. However. in order to get them accepted they require support from the majority of Parliament.

To push them in the right direction, a coalition of digital rights groups have created the SaveTheInternet website where European citizens can share their concerns, encouraging their representatives to vote in favor of the amendments.

More information and comments on the European net neutrality rules are available on Medium. Next week we’ll know if the campaign helped, or if BitTorrent and VPN traffic are still at risk. 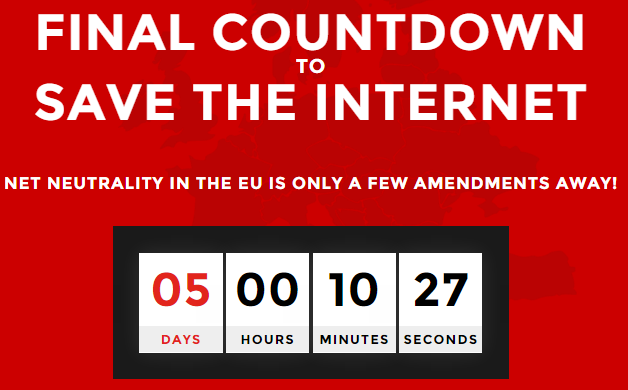