Expendables 3 Downloaders Told To Pay Up – Or Else 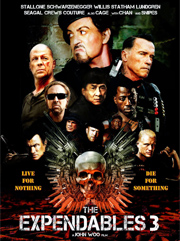 Back in July a pretty much pristine copy of The Expendables 3 leaked online. It was a dramatic event for those behind the production as the movie’s premier on BitTorrent networks trumped its theatrical debut by several weeks.

Distributor Lionsgate was quick to react. Just days after the leak the entertainment company sued several file-sharing sites, which eventually resulted in the closure of file-hosting site Hulkfile. But more action was yet to come.

Doubling up on their efforts, Lionsgate also targeted hosting providers, domain registrars and seedboxes while at the same time sending thousands of DMCA takedown notices to have content and links to content removed.

However, a big question remained unanswered. Would the makers of The Expendables 3 start tracking down alleged file-sharers to force them into cash settlements as happened with previous iterations of the movie? It’s taken a few weeks but confirmation is now in.

Millennium Films, the production company behind The Expendables 3, is now shaking down individual Internet users they believe to have downloaded and shared the leaked movie without permission. What do they want? Hard cash, of course.

Interestingly, and at least for now, the company isn’t going through the courts filing subpoenas against ISPs to obtain downloaders’ personal details. In a switch of tactics the company is sending DMCA takedown notices to ISPs via CEG TEK International and requesting that the notices are forwarded to the customers in question instead. In addition to the usual cease and desist terminology, Millennium tag on cash settlements demands too. 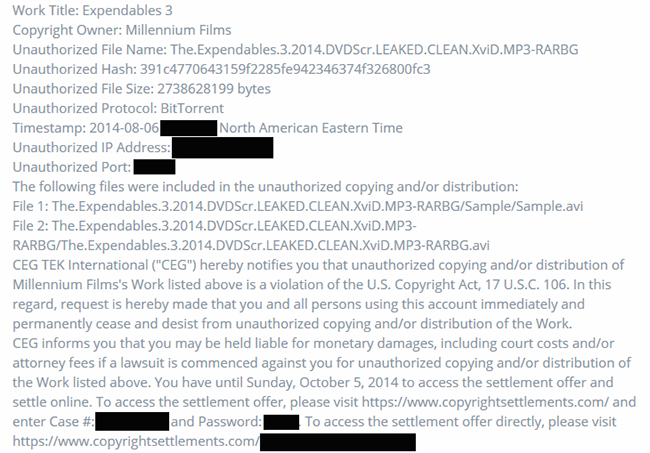 As can be seen in the image above, the production company is giving notice recipients until October 5, 2014 to come up with the money – or else.

“If within the prescribed time period described above you fail to (i) respond or settle, or (ii) provide by email to [email protected] written evidence of your having consent or permission from Millennium Films to use the Work in connection with Peer-to-Peer networks (note that fraudulent submissions may give rise to additional liabilities), the above matter may be referred to attorneys representing the Work’s owner for legal action,” the settlement offer reads.

Of course, whether people fill in CEG TEK’s settlement form or write to them with their personal details, the end result will be the same. The company will now have the person’s identity, something they didn’t previously have since at this stage ISPs have only forwarded the notices.

While the notices are real (CEG TEK have confirmed the action) little is known about how much money Millenium/CEG TEK are demanding to make a supposed lawsuit go away. However, TorrentFreak has learned that CEG TEK are simultaneously sending out settlement demands to alleged downloaders of The Expendables 2. A copy of the settlement page demand – $300 – is shown below. 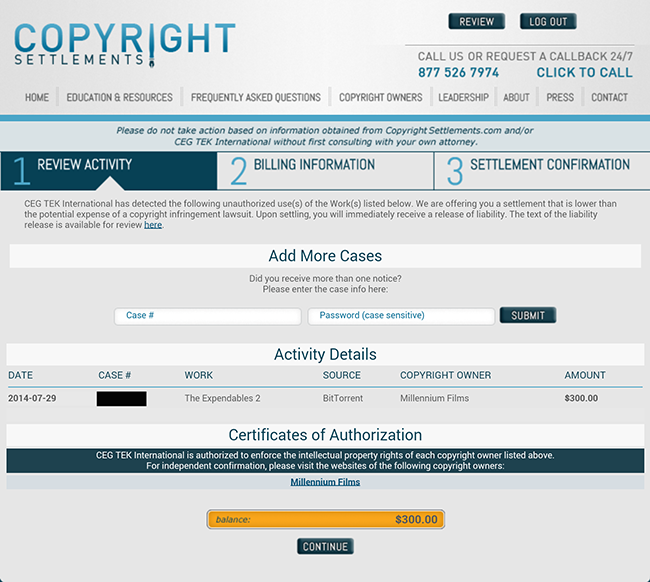 While some people will no doubt be worrying about how to deal with these demands and whether Millenium will follow through on its implied threat to sue, at least some of these notices will be falling on deaf ears. LiquidVPN, an anonymity company listed in our 2014 report, received one such notice but as a no-log provider, could not forward it to its customer.

Compare that to the despair of a user posting on KickassTorrents who got caught after relying on IP address blocking software (typos etc corrected).

“I woke up to this alongside four other notices from my ISP. I stopped downloading six days ago, but I’m receiving old notices about movies that were downloaded a month ago and I basically can’t do nothing about it since its old. I use PeerBlock and it’s a bunch of bullshit. What should I do with this October 5 deadline on a settlement? Please help!” he wrote.

Who – at Lionsgate, Millennium or one of its partners – had full access to a clean DVD copy of the movie? Who then put that copy in a position of being placed online? The FBI, who can crack the most complex of terrorist crimes, are reportedly involved and must’ve asked these questions. Yet the culprit still hasn’t been found……

Could it be that studios become less cooperative when blame falls too close to home?