Today sees the official premiere of The Expendables 3, but what was supposed to be a celebration for the makers has turned into a fiasco.

Three weeks ago a high quality leak of the film appeared online. This resulted in millions of downloads long before it reached the big screen.

Fearing a massive loss in revenue, Lionsgate issued thousands of takedown requests to limit the leak’s availability and sued six file-sharing sites that allegedly failed to respond to these notices.

It now appears that Lionsgate has more tricks up its sleeve. The owner of cloud hosting service filecloud.io informs TorrentFreak that he never heard from Lionsgate, yet the movie studio is now going after his DDoS protection provider Cloudflare and domain registrar Easyname.

TorrentFreak obtained a copy of the notice, which is also believed to have been sent to the service providers of several other file-sharing sites. In the notice Lionsgate’s law firm Kilpatrick Townsend & Stockton requests that these companies render the sites in question unavailable.

The law firm lists several allegedly infringing URLs and points out that the hosting providers and domain name registrars have to take responsibility. 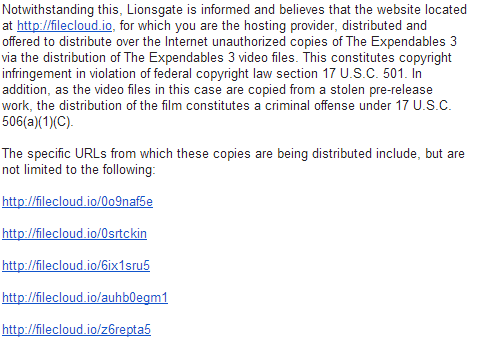 The following text comes from a notice Cloudflare and others received, accusing the company of potentially assisting a criminal operation and ignoring a previous notice.

“In accordance with the DMCA, we have already notified you of the infringement, but you have continued to cause, enable, induce, facilitate and materially contribute to the infringement by continuing to provide your users with the means to unlawfully distribute, reproduce and otherwise exploit The Expendables 3,” the email reads.

The same takedown notice was also sent to the domain name registrar Easyname, who were encouraged to “take action” against the allegedly infringing site under ICANN rules. In their notice Lionsgate appears to hint at a domain name suspension.

“If you are the domain name registrar for the domain name referenced above, under ICANN rule 3.18.1, you are required to take reasonable and prompt steps to investigate and respond appropriately to any reports of abuse,” the notice reads.

“You are hereby put on notice that despite Rule 3.18, and the website owner’s representation to you that it is not using the domain name ‘in violation of any applicable laws’, the owner is either directly infringing the rights of Lionsgate or contributing to such infringement through the distribution of the stolen work referenced above,” it adds.

Lionsgate’s methods are unusual as the operator of filecloud.io was never contacted by the movie studio’s law firm. There were abuse mails sent by other outfits though, and the URLs listed in the takedown notice were already taken offline. This means that the infringing pages listed by Lionsgate were directed to a 404 page.

The owner of filecloud.io informs TF that he’s not happy with the pressure Lionsgate has put on the companies he works with, especially since they failed to first contact the site itself.

“It might be nice if these complaining entities actually checked that their emails have a valid claim before firing them off to everyone under the moon,” filecloud.io’s owner notes.

“The majority of notices I get daily are dud but at least none of them go out of their way forwarding their gripe to everyone who has anything remotely to do with the site,” he adds.

In this case the notices haven’t yet caused any trouble for filecloud.io, but it’s not hard to imagine a scenario in which smaller companies are easily threatened to pull the plug on an accused site.