Many Hollywood insiders see online piracy as a major threat, but very few are willing to target file-sharers with lawsuits or settlement demands.

Voltage Pictures was one of the pioneers on this front, at least in the US. Together with their legal team and BitTorrent tracking partner, the filmmakers have sued tens of thousands of people since 2010.

Initially, this was a very lucrative practice, as rightsholders were able to join many defendants in a single lawsuit. However, nowadays courts are more reserved, which is one of the reasons they started to look for alternatives.

One interesting development on this front is the company “Rights Enforcement.” This outfit tracks down BitTorrent pirates, but instead of taking them to court they send automated ‘fines’ via DMCA notices, asking for a $300 settlement.

By using the DMCA notice process, the rightsholders avoid expensive lawsuits. It also makes the settlement process easier to scale, since they can send out tens of thousands of ‘fines’ at once with limited resources.

While these schemes are not new, Rightscorp and CEG TEK have done the same, Rights Enforcement has a nasty sting in store for accused pirates.

The company is operated by lawyer Carl Crowell, who is best known for his work with various notorious copyright trolls. This includes the aforementioned Voltage Pictures, which filed lawsuits for several movies such as Dallas Buyers Club and The Hurt Locker.

These ties appear to be still intact, as the Rights Enforcement company lists several movies on its client list, many of which are linked to Voltage Pictures. Dallas Buyers Club is on there for example, as well as I.T., Mr. Church, Fathers & Daughters, Pay the Ghost, The Cobbler, and Good Kill. 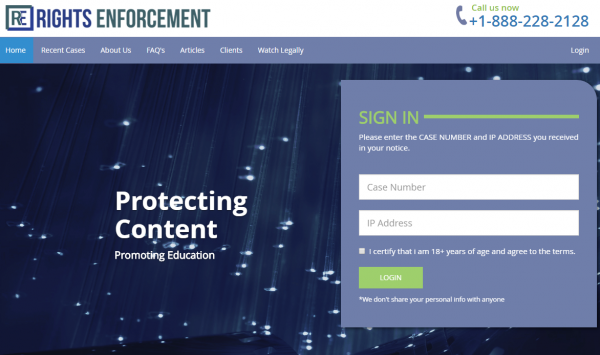 The client list suggests that that the makers of these movies are now trying to extract settlement money from alleged file-sharers through automated settlements, because this is cheaper and possibly more profitable.

This is also what Rights Enforcement suggests on its website:

“Online infringement, including ‘peer-to-peer’ copying of material across the Internet is pervasive. Too often parties and rights holders are forced into the expensive forum of the courts,” the outfit writes.

“With filing fees of $400 and copyright damages in some jurisdictions reaching $150,000 for a single act, we work to permit rights holders to notify and address infringers and resolve their claims in an efficient and cost effective manner.”

The ‘sting’ with Rights Enforcement, is that they have a team of known ‘troll’ lawyers lined up to wave the legal stick. In other words, if targeted subscribers are unwilling to pay but mistakenly identify themselves, they can still be taken to court.

They are not shy to use this threat either. In their automated DMCA settlement notices Rights Enforcement warns that a failure to cooperate can lead to legal action.

“You may consider this a notice of potential lawsuit, a demand for the infringing activity to terminate, and a demand for damages from the actual infringer,” the automated email reads.

“We invite your voluntary cooperation in assisting us with this matter, identifying the infringer, and ensuring that this activity stops. Should the infringing activity continue we may file a civil lawsuit seeking judicial relief.”

It’s currently unknown who does the BitTorrent tracking, but according to defense lawyer Robert Cashman, it’s likely that the German outfit Guardaley is involved.

TorrentFreak spoke with Cashman, who has represented several accused pirates in the past. He is warning people against Rights Enforcement, describing it as a “monster” and the “evil twin” of settlement outfit CEG TEK.

“So in essence, Right Enforcement will be a monster. It’ll be an evil version of what CEG-TEK strove to become,” Cashman says.

The link with CEG TEK comes up because it stopped sending out settlement requests recently. The company, which represented a current Rights Enforcement client in the recent past, now states on its website that it’s no longer offering settlement services. That said, we haven’t been able to find a direct link between the two outfits.

On a similar note, Rights Enforcement “boss” Carl Crowell was previously hired by another settlement firm, Rightscorp. While this may have served as inspiration, we haven’t seen any direct ties.

One thing’s for sure, though. Given the outspokenness of Crowell and the aggressive tactics he and other partners have employed in the past, this is certainly not the last time we’ll hear of Rights Enforcement.