The commission suggested allowing the use of VPNs to bypass geo-blocking efforts. In addition, the proposals include drastically lowering the copyright term, while also introducing fair use exceptions.

Various interested parties have since responded to the proposals. As expected, copyright holders are not happy with the plans and some are outright offended by the recommendations.

For example, a coalition of Aussie TV and movie groups point out that the language being used reflects a “slanted, superficial and under-informed approach.” Similarly, two writers’ guilds describe the draft report as an “attack on the livelihoods” of Australian creators.

From the “offending” report 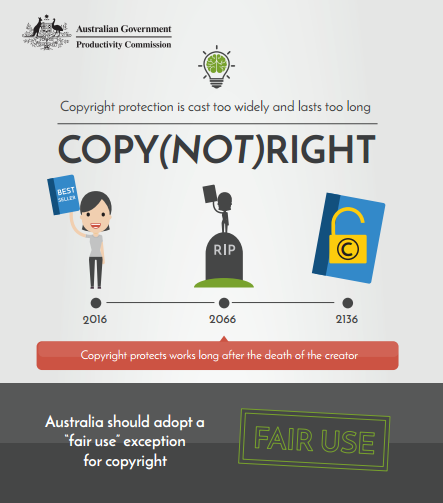 Several rightsholder groups argue that strong copyright protections are essential for the survival of their businesses. This includes a long copyright term of 70 years, as well as the ability to block access to content based on the location of a consumer.

In addition, many believe that fair use exceptions will do more harm than good. For example, music group IFPI warns that fair use will threaten innovation and create legal uncertainty.

Copyright is the cornerstone of the music industry, according to IFPI, while fair use will mostly benefit outsiders who want to profit from the work of others.

“The music industry exists because of copyright. Copyright drives innovation and creativity, enables record companies to invest in artists and repertoire, and gives creators an income.

“It is no coincidence that those who champion the ‘flexibility’ of fair use exceptions/defenses typically are those whose business models depend on unfettered access to copyright works.”

TV company Foxtel issues a similar warning about fair use. According to the Australian pay television company, it will directly damage the country’s creative industries.

“Fair use will introduce significant and unnecessary uncertainty into Australian law,” Foxtel writes.

“A fair use exception would be wide, vague and uncertain, while at the same time it would significantly erode the scope of copyright protection which is so critical in protecting investment in Australia‘s cultural industries.”

Foxtel also warns that third parties will exploit fair use exceptions at the expense of rightsholders. This will eventually hurt revenues and threaten the creation of new content.

But it’s not just major companies protesting against the proposed changes. The Australian Writers’ Guild also warns against fair use.

They believe that it will disadvantage their members, who don’t have the means to protect themselves against large corporations that could invoke fair use as a defense.

“We are particularly concerned about the uncertainty created by the introduction of fair use,” they write.

“It will contingent on scriptwriters, for example, to mount legal cases that their work has been infringed and is not subject to legitimate fair use by the respondent, who is likely to be a large corporation such as a news organization or search engine.”

While the copyright holders fiercely oppose fair use exceptions, others such as Google welcome it with open arms. According to Google, fears surrounding the uncertainty it would create are overblown.

Interestingly, Google cites none other than Hollywood’s anti-piracy group MPAA to make its case.

“Our members rely on the fair use doctrine every day when producing their movies and television shows – especially those that involve parody and news and documentary programs,” the MPAA stated previously.

The Government’s Productivity Commission will take the comments from various stakeholders into account before moving forward. The final report will be handed to the Government in August and published shortly after.