Under the banner “Operation In Our Sites”, authorities targeted nine domains that are claimed to have offered first-run movies without consent from the copyright holders, a serious criminal offense under U.S. law.

“Criminal copyright infringement occurs on a massive scale over the Internet, reportedly resulting in billions of dollars in losses to the U.S. economy,” said Preet Bharara, the U.S. Attorney for the Southern District of New York, whose office handled the warrants authorizing the seizures of seven of the domains. 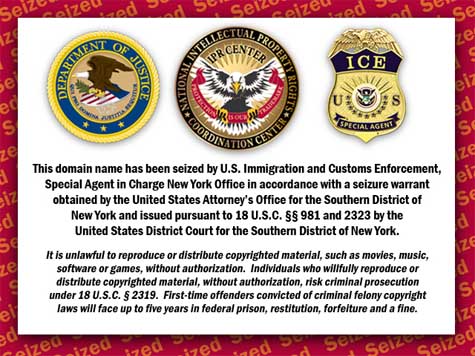 The other two domains targeted – NinjaVideo.net and NinjaThis.net – belong to the hugely popular streaming service NinjaVideo. According to authorities the site had been subjected to a months-long operation which resulted in the seizure of both their domains and website content.

“This investigation resulted in the execution of federal search warrants for their content and domain name at servers in the United States and the Netherlands. HSI agents also executed four residential search warrants in North Carolina, New Jersey, New York and Washington,” reads the ICE announcement.

Here at TorrentFreak this announcement didn’t really come as a surprise. Several months ago we were informed that NinjaVideo was being closely watched but we had no idea the U.S. authorities were behind it.

In March we received word that Dutch police had arrived at Ecatel, NinjaVideo’s host in The Netherlands. Our sources said that servers had been removed for examination but had been later returned. TorrentFreak contacted Ecatel who told us that “your sources have given you a lead far removed from the truth.”

We also contacted NinjaVideo and gave them what few details we had but after emails back and forth, it became clear that NinjaVideo either couldn’t or wouldn’t be drawn on the information we had provided. Without any absolute clear information or quotable sources we were sadly forced to abandon our planned article.

Now, three months later NinjaVideo is one of the nine websites that were targeted by the U.S. Government. As is often the case, however, not all of the websites are surrendering without putting up a fight. At least two sites have already adapted.

Movies-Links.TV, is operational under the new domain name of Watch-Movies-tv.info and TVShack.net is now located at TVShack.cc. Both are hosted with former Pirate Bay bandwidth supplier CB3ROB and both are mentioned in a previous MPAA copyright warning.