Following a complaint from major media companies Rogers, Bell and TVA, the Court ordered several major ISPs to block access to the domains and IP-addresses of pirate IPTV service GoldTV.

There was little opposition from Internet providers, except for TekSavvy, which quickly announced that it would appeal the ruling. The blocking injunction threatens the open Internet to advance the interests of a few powerful media conglomerates, the company said.

Soon after, the landmark case also drew the interest of several third parties. There were copyright holder groups that argued in favor of site blocking, but also the Canadian domain registry (CIRA) and the University of Ottowa’s legal clinic CIPPIC, which both oppose the blocking order.

In March the Federal Court of Appeal heard arguments from both sides and today Justice George R. Locke issued the final judgment, which dismisses the appeal.

In a 42-page reasoning, Justice Locke considers whether the Federal Court has the power to grant a blocking order, if that order violates freedom of expression, and whether it is just and equitable. On all issues the Court sides with the copyright holders.

TekSavvy argued that site-blocking shouldn’t be used as a remedy because it isn’t specifically mentioned in the Copyright Act carefully constructed in Parliament. Copyright holders should rely on the notice-and-notice system instead. However, Justice Locke disagrees.

“The fact that Parliament has put in place a regime to notify an alleged copyright infringer that its activities have come to the attention of the copyright owner does not suggest that this represents a limit on the remedies to which the copyright owner is entitled,” the reasoning reads.

According to the Court, there is no doubt that the GoldTV Service infringes the plaintiffs’ copyrights. And after an injunction against the service itself failed to have any effect, a site-blocking injunction is warranted.

TekSavvy also argued that site-blocking would violate net neutrality. According to the Telecommunications Act, ISPs are not allowed to control or influence the content on their network without approval from the CRTC. Again, the Federal Court of Appeal sees things differently.

“In my view, the general wording of section 36 of the Telecommunications Act does not displace the Federal Court’s equitable powers of injunction, including the power to impose a site-blocking order,” Justice Locke writes.

The reasoning clarifies that TekSavvy isn’t “controlling or influencing” anything when it complies with a court order. On the contrary, it is being controlled or influenced by the order.

The freedom of expression defenses didn’t fare much better. The Court of Appeal sees no errors in the original verdict and concludes that this factor was sufficiently considered. This includes any potential over-blocking problems that may occur.

TekSavvy’s arguments that the blocking order not ‘just and equitable’ were dismissed as well. This includes the burden that a constant stream of blocking amendments and dozens of new blocking cases will cause.

Justice Locke agrees that problems may eventually arise in the future, but these will be dealt with then. They are no reason to deny the blocking order.

Finally, the Federal Court of Appeal wasn’t receptive to the suggestion that copyright holders should consider other non-blocking options first, such as seeking help from Cloudflare or payment providers. There is no basis to conclude that these options would be effective, according to the Court.

All in all, Justice Locke concludes that the appeal should be dismissed and Justices Nadon and LeBlanc concur.

“Having found no error in the Judge’s conclusion that the Federal Court has the power to grant a site-blocking order, and having likewise found no error in his analysis of the applicable legal test, I conclude that this Court should not interfere with the Judge’s decision,” Justice Locke writes. 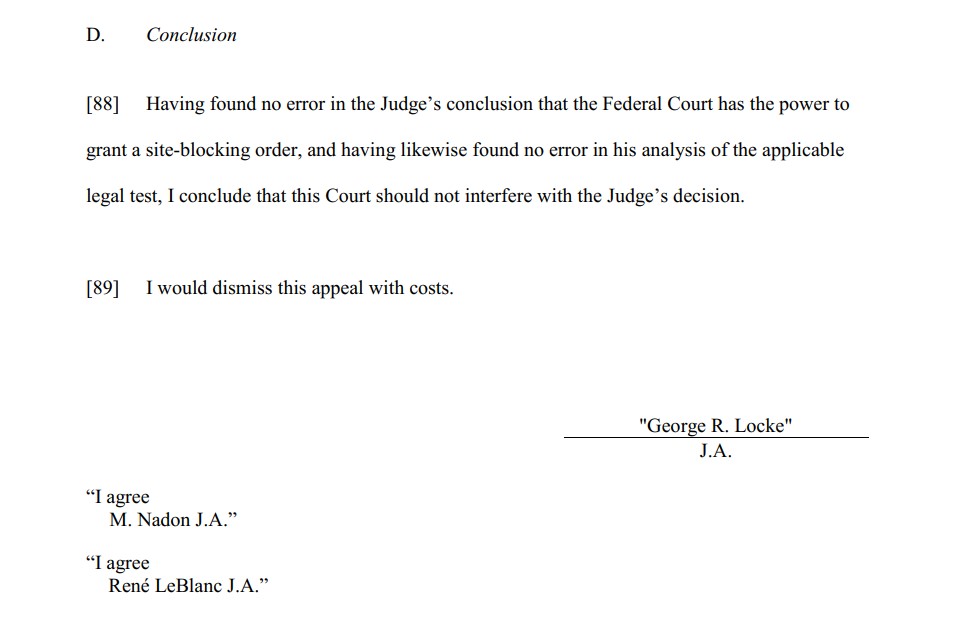 The Canadian domain registry CIRA, which intervened in this case, is disappointed with the outcome.

“Many Canadians will be disappointed by today’s ruling,” CIRA president and CEO, Byron Holland says. “While it is important to underline that the court did not open the door for ISPs to block of their own volition, we believe fundamentally that there are more proportionate responses to copyright infringement than the GoldTV precedent prescribes.”