Two days later the Dutch Institution for Information Law and CentERdata have published a related report which goes even further. The survey finds that more than a quarter (27.2%) of Dutch citizens, 16 years old and up, have downloaded from illegal sources during the past year.

Interestingly, however, the same data also shows that these file-sharers are more likely to be paid consumers of a wide variety of media and entertainment, even when the results of the 2,009 respondents are controlled for age.

The graph below shows that file-sharers are paying for digital music, movies, games and books more often, compared to those who haven’t downloaded any files from illegal sources (table), with the results being controlled for age.

Putting it differently, the same data concludes that two-third of all music file-sharers does pay for music downloads or streams. 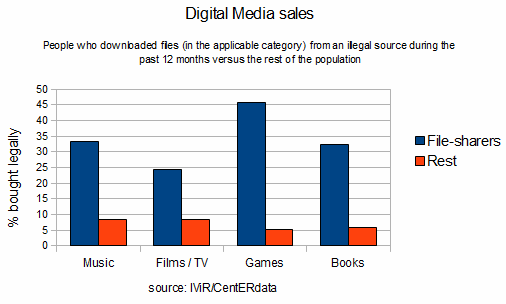 Interestingly, similar effects are found for physical media, but the differences are smaller here. The conclusion is nonetheless that file-sharers are also more likely to buy physical books, CDs and DVDs and games.

The difference is most pronounced for games with 65% vs. 14%. 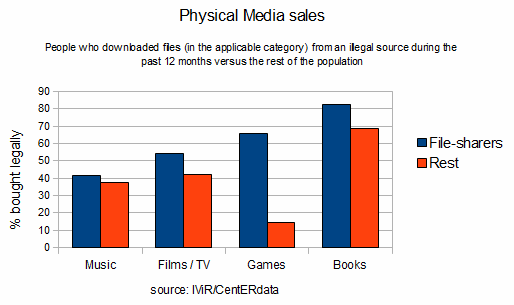 Speaking with TorrentFreak, researcher Joost Poort explains his findings by arguing that file-sharers tend to be more heavy entertainment consumers than those who don’t share anything.

“Some people are really into music, watching movies, gaming or reading books. I think our findings indicate that such people tend to make more intensive use of all available channels, both legal and illegal.”

“For most consumers, there is no Chinese wall between legal and illegal content, they decide what sources to use depending on their needs or expectations,” Poort adds.

In addition to media buying habits, the survey also looked at spending on related entertainment such as concerts, movie tickets and merchandise. Again, the researchers conclude that file-sharers are spending money more often than the rest of the population.

Those who downloaded movies from illegal sources during the past 12 months are 50% more likely to go to the movies than non-downloaders, for example (64% vs. 42%). 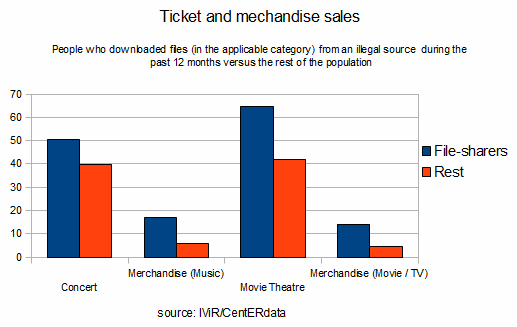 The correlation, however, should not be interpreted as a causal relationship. People don’t necessarily buy more because they share files, or vice versa. While sampling may be a factor, third variables such as interest in movies and music are likely to drive much of the effect.

The researchers themselves stress that the data nonetheless should act as a warning for the entertainment industries, as it turns out that many file-sharers are also customers.

“The correlation stands out as a warning to industries not to alienate their most important clients from them, by criminalizing their behavior. My slogan is: don’t sue your customers, seduce them,” Joost Poort told TorrentFreak.

The survey also looked at the effect of the court-ordered Pirate Bay blockade in the Netherlands. These results show that among the customers of ISPs who already enforce the block, only a small minority (5.5%) say they have stopped downloading or now download less.

According to Poort, punishing people and censoring the Internet is futile.

“I don’t see much in blocking sites or going after downloaders. It will make people smarter and more convinced about downloading from illegal sources.”

Poort further tells TorrentFreak that he sees no bright future for strict copyright enforcement measures. Instead, the entertainment industry should focus more on improving their legal offerings.

“Get your business model right and realize consumers no longer accept what they had to accept 20 years ago,” Poort says.

The survey backs up this stance as it reveals that music file-sharing is declining in the Netherlands, a result that can be in part attributed to newly launched legal services such as Spotify.

The full results of the Institution for Information Law report are available here in Dutch. An English version is expected to be published in a few weeks.