After their successful debut album Fleet Foxes’ singer Robin Pecknold immediately made it clear that he dislikes the corporate greed that surrounds the major record labels. “Fleet Foxes will never, ever, under no circumstances, from now until the world chokes on gas fumes, sign to a major label,” Pecknold wrote in a blog post after the rumor spread that they’ve signed up with a major record label.

According to Pecknold the major labels seem to be anti-music. What really helped him and other bands to shape their sound and spark their creativity is file-sharing. “That was how I was exposed to almost all of the music that I love to this day, and still that’s the easiest way to find really obscure stuff,” he told the BBC.

“I’ve discovered so much music through that medium. That will be true of any artist my age, absolutely,” Pecknold added. He explained that he is not the only musician to have benefited from ‘stealing’ music, as the major labels like to call it. Having access to an unlimited library of music only makes a musician better. 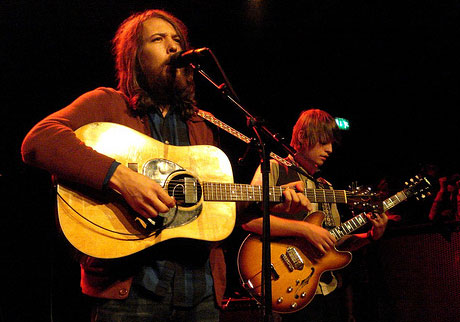 Indeed, many BitTorrent trackers dedicated to music are populated by thousands of artists, who share their own work and that of others. Most famously, Nine Inch Nails frontman Trent Reznor was a proud member of the now defunct OiNK tracker.

Pecknold is no different, and he recalls the finesse of his own music changing for the better after his dad brought home a modem to connect the family to the Internet – a candy store for the modern age musician. And if the fans want to share their latest album he’s totally fine with that.

“I’ve downloaded hundreds and hundreds of records – why would I care if somebody downloads ours? That’s such a petty thing to care about. I mean, how much money does one person need? I think it’s disgusting when people complain about that, personally,” he admitted.

The labels have a different view on the piracy issue of course, claiming that they lose billions of dollars because of it. Most people know by now that this is far from the truth. However, after chasing down music fans in court they are now starting to lose respect among musicians.

While they still might be able to successfully market a kid star here and there, most artists don’t really need a label to distribute music in the digital age. BitTorrent does that just fine, right Robin?