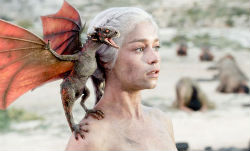 Game of Thrones has the honor of becoming the most downloaded TV-show for the second year in a row.

With 5.9 million downloads via BitTorrent, the 2013 season finale has beat the competition by a landslide.

More than half of the downloads occurred in the first week after the show aired and the total exceeds the number of traditional viewers in the US. Breaking Bad and The Walking Dead complete the top three with and estimated 4.2 and 3.6 million downloads respectively.

Game of Thrones’ win comes as no surprise since the show has broken two piracy records already this year, with over 170,000 people sharing a copy of an episode simultaneously.

There are a wide variety of reasons why people download TV-shows, but to a certain degree one could claim that HBO is to blame for the massive piracy of Game of Thrones. The network prefers to keep access to the show “exclusive” and even Netflix wasn’t able to buy the rights no matter what they offered.

Interestingly enough, we also learned this year that the huge number of unauthorized downloads don’t bother the show’s makers all that much, quite the contrary. Game of Thrones director David Petrarca previously admitted that piracy generated much-needed “cultural buzz” around his show.

Jeff Bewkes, CEO of HBO’s parent company Time Warner, went even further, stating that piracy resulted in more subscriptions for his company and that receiving the title of “most-pirated” was “better than an Emmy.”

On the other end of the spectrum we have Gale Anne Hurd, executive producer of The Walking Dead, who told Variety last week that unauthorized downloads are not necessarily the blessing others claim they are.

“There’s a mistaken belief by many of my peers that piracy is somehow good, that viewers will develop a habit to pay for it. I’m not sure they really understand other than anecdotal evidence that their ratings go up that the people who pirate are not then going to choose legal downloads or legal viewing in the future,” Hurd said.

Hurd has a point, as it’s not always that easy for existing pirates to give up their habit, not even if the legal options are widely available and free. For example, The Walking Dead premiere this year was downloaded en masse in the US, despite the fact that AMC streamed the show for free.

This debate about whether TV-show piracy is a good or bad thing will most likely continue throughout the coming year, and beyond.

Below we have compiled a list of the most downloaded TV-shows worldwide ( per single episode) for 2013, together with the viewer average for TV in the US. The data are estimated by TorrentFreak based on several sources, including download statistics reported by public BitTorrent trackers.

It is worth nothing that online streaming and cyberlocker downloads are not included since there are no public sources to draw data from. The total piracy numbers will therefore be significantly higher.