More than a week after the opening episode of the new Game of Thrones season aired it’s evident that piracy is still rampant.

The good news for HBO is that the official broadcast broke ratings records. However, pirated releases have also done the same.

With the four leaked episodes and the “A Day in the Life” documentary included, the company found that there were 32 million downloads across 18 million IP-addresses during the first week.

The first episode generated most interest and was downloaded over 13 million times, which is significantly more than last year. Interestingly, the data for the post broadcast torrent also shows that most downloaders grabbed high quality copies.

In part, this tendency towards high quality content can be explained by the fact that many fans of HD content skipped the lower quality pre-release leak.

Looking at countries from where the downloads were actioned we see that the United States comes out on top. More than 10 percent came from the U.S. followed by France, Brazil, China, Russia, UK, India, Canada, Australia and Spain.

Australia has the most downloaders per capita from that list, and it also has a relatively high piracy ratio compared to legal views.

Of all ‘viewers’ in Australia during the first three days, 32 percent are pirates. In the U.S. the rates are much lower at 8 percent, and the UK and Canada are in the middle with 22 and 19 percent respectively. 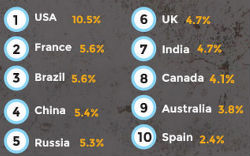 Commenting on the findings, Tru Optik notes that there are a lot of potential customers out there, if HBO can connect with them.

“In the US alone, nearly one million consumers downloaded Episode 1, which translates to $44 million in unmonetized demand potential if each of these viewers subscribed to HBO Now for the 3-month duration of GoT Season 5.”

“Many of these viewers are prime prospects for unbundled services like HBO Now,” the company adds.

Over the past three years Game of Thrones has been the most pirated TV-show. Based on the number of downloads over the past week, the same result will be achieved in 2015.