Founded by brothers Patrick and Daniel Klug, Greenheart Games is a small indie game studio that just debuted its first title. The cross-platform simulation game “Game Dev Tycoon” takes players back to the 80s, with the challenge to become market leaders by releasing new and innovative games.

After two years of development the game went up for sale yesterday, but the developers also considered those who might want to pirate it.

In addition to putting out a legit copy the brothers also released a cracked game which they voluntarily shared on The Pirate Bay. This modified version of the game comes with a slight change in gameplay.

A few hours into the game players of the “cracked” copy see a rather depressing in-game note, telling them that their virtual game is being heavily pirated.

Soon after that the player’s funds start to decrease. The other games they release are hit by piracy as well, resulting in the bankruptcy of the virtual gaming company they had just built up. 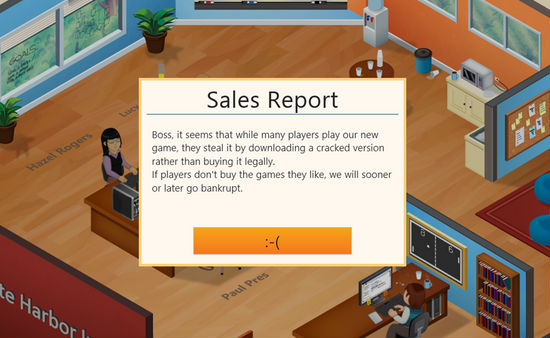 “Initially we thought about telling them their copy is an illegal copy, but instead we didn’t want to pass up the unique opportunity of holding a mirror in front of them and showing them what piracy can do to game developers,” Greenheart’s Patrick Klug explains in a blog post.

Soon after Greenheart Games uploaded the cracked copy thousands of people downloaded it, and some pirates started to share their struggles online. As it turns out, pirates can get very frustrated with their virtual counterparts.

“Why are there so many people that pirate? It ruins me!” one pirate complained.

“I even tried making a cheap shitty game so the pirate message will pass, but the next game I make with the rest of my money will be pirated too,” another one whined.

While the irony of this little experiment is rather entertaining, the reality for Greenheart Games is that pirates appear to be far more interested in the game than legal consumers.

While there is no guarantee that any of the pirates would have bought the game if there wasn’t a cracked copy available, the stats below show that piracy is rampant, just as in the game itself. 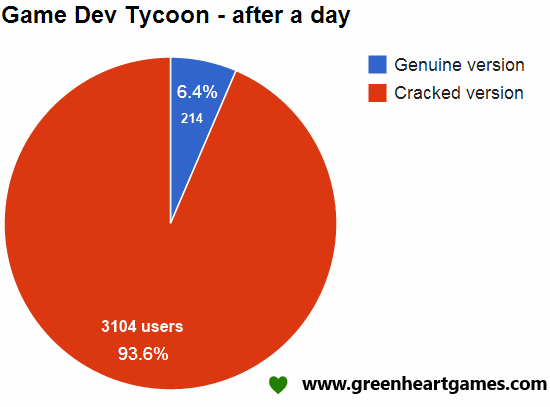 Nonetheless Greenheart Games’ Patrick Klug explains in his blog post that he doesn’t hold a grudge against the downloaders.

“I’m not mad at you. When I was younger, downloading illegal copies was practically normal but this was mostly because global game distribution was in its infancy. To be fair, there are still individuals who either can’t make a legal purchase because of payment-issues or who genuinely cannot afford the game,” Klug says.

However, he does encourage those who can afford it to pay the 8 bucks it costs to get a legal copy. This guarantees that they can make a bigger and better version of Game Dev Tycoon in the future, and develop more DRM-free games like it.

Greenheart Games refuses to put DRM on their games because it hinders legitimate customers, while pirates get the hassle free version. In their experiment the brothers successfully turned the tables, but unfortunately this is not the case for most other games.

“If pirates are put through more trouble than genuine customers, maybe more will buy the real game. Sadly, for AAA games it is currently the other way. Customers get the trouble with always-on requirements and intrusive DRM, while pirates can just download and enjoy. A twisted world,” Klug writes.

This position may seem logical to most game fans, but ironically those who downloaded the cracked copy of Game Dev Tycoon would have been eager to fill their virtual games with DRM if they had the chance.

The full article about this experiment can be read here. Please consider buying the game if you’re interested, progress guaranteed.