Giganews / Golden Frog Founder Fires Off at Dropbox and Mega 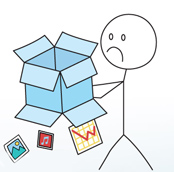 On Monday a controversial domain was brought to our attention. The site, DumpDropbox.com, seemed to have one thing on its mind – providing a laundry list of reasons why users should literally dump Dropbox.

The reasons the site gives are many, from Dropbox relying on Amazon’s servers instead of its own, using data deduplication which “sacrifices user privacy”, a lack of encryption, to other concerns including a claimed vulnerability to US privacy laws.

We wanted to know who was behind DumpDropBox so we started asking questions. Our inquiries kept turning up the same name over and over again.

Golden Frog are the operators of VyprVPN and the Dump Truck file-storage product which is given away free to every subscriber of Usenet giant Giganews. Although separate business entities, Golden Frog and Giganews have a few things in common, not least their sharing of the same co-founder, Internet entrepreneur Ron Yokubaitis.

Yokubaitis is a resident of Austin, Texas, so it didn’t come as a surprise that TorrentFreak managed to catch up with him during the SXSW festivities on Monday. So, is Golden Frog behind the anti-Dropbox campaign?

“Yes, Golden Frog is behind the dumpdropbox.com website,” Yokubaitis told us.

“Austin is our hometown so we wanted do something fun at SXSW. We decided the dumpdropbox.com campaign was a fun way to inform users about the privacy and security issues that affect online storage. We hope these conversations continue beyond SXSW.”

One key claim from the campaign site is that Dropbox doesn’t use its own servers for file-storage but relies on Amazon’s instead. Many sites rely on ‘the cloud’ – not least The Pirate Bay – so why does this pose a problem?

“Our goal is to educate users that there is ‘another way’ – Your data. Our servers. No 3rd parties,” Yokubaitis explained. “At our core, Golden Frog is focused on providing secure online tools for netizens and I think that resonates with both Golden Frog and Giganews userbases.”

Amazon’s servers are in the United States, a point highlighted as a supposed negative on the DumpDropBox site. However, raising this issue of jurisdiction is tricky for Dump Truck. Its servers are also entirely based in the U.S. but Yokubaitis told us that will soon change. In response to concerns European customers have over U.S. privacy laws, in the coming months users will be given a choice of where to store their files.

“Dump Truck will launch a European server cluster this year with the ability for users to designate that their files be stored in ‘Europe only’,” Yokubaitis told us. “We do a lot of business in Europe and our European users have heavily requested the feature. We are very focused on meeting the needs of our European userbase.”

So what exactly are the problems with the US?

“There are doubts about storage companies in the US and we share the same concerns. Last week, there was much discussion about Microsoft and Verizon scanning user’s files,” Yokubaitis said, pointing us to this article on Ars.

When considering possible weaknesses of US-based file-hosting services another issue comes to mind – the fate of Megaupload. Of course, Kim Dotcom is off to a fresh start with Mega.co.nz in New Zealand, backed by a company that is going out of its way to comply with every legal requirement. The service has received a good reception overall so we asked Yokubaitis if he sees Dotcom’s baby as a serious competitor. He wasn’t complimentary.

“Mega’s history makes them hard to trust with any important data. They’ve shown that they have little respect for governments and other corporations, and that leads to battles where the victim is the customer’s data. They might ‘beat the rap’, but their customers are getting ‘taken for a ride’,” he said.

That’s pretty harsh criticism. Time and again Kim Dotcom and his team have reported that they sought the best legal advice in the United States and were informed that their service complied with the law. And of course, Megaupload was a storage facility at its heart, one not entirely different from those provided by Dump Truck or indeed Giganews.

All of these services accept content uploaded by their users (some of it infringing, but that’s not the companies’ faults) and all have to comply with the DMCA as a result. Megaupload did and there’s no doubt that Giganews and Golden Frog do too – it’s almost a fact of life on the web these days. Nevertheless, Yokubaitis sees differences between the products.

“Ultimately, Mega looks to be the same service as Megaupload, just with more ass-covering for Mega. The fact that they don’t have tools to enable you to sync between your life and Mega shows that it’s a file-sharing product only. We don’t want Dump Truck users to sacrifice ease of use for security and privacy. We want our users to have both,” he concludes.

Perhaps it’s because i’m from Europe but I find the DumpDropbox campaign fairly uncomfortable reading. That being said, i’m informed this style of ‘negative’ advertising is common and widely accepted in the United States. Personally i’d prefer to see the virtues of a particular product promoted on their own merit, but others may well see things differently. Maybe the only important point is whether running Dropbox down will achieve the required result of more sales for Dump Truck, but for the answer to that we shall have to wait and see.

At the time of publication Dropbox had not responded to a request for comment.