As thousands of news reports, articles and research papers agree, today’s Internet is absolutely awash with infringing content. As a result, dozens of companies have appeared to try and stem the tide by sending out DMCA takedown notices on behalf of rightsholders.

The number of notices being sent out is nothing short of incredible. During the last full week of September, Google reported that it had processed a record breaking 5.3 million URL takedowns, that’s around eight every second. But yet again the record was short lived.

During the first full week of October, Google processed very close to 6.5 million notices in a single week, that’s an incredible 10.7 notices every single second of every single day.

Faced with a monumental task it’s no surprise that rightsholders make mistakes, everyone is prone to them of course, but some have the potential to cause real havoc.

In an effort to keep an eye on the situation TorrentFreak regularly scours Google’s Transparency Report and the archives on Chilling Effects, and every now and again we find some classics. Yesterday was one of those days.

On the front page of Google’s report the company now lists a few takedown notices that it received but decided not to take action against. As can be seen from the image below listing four instances, the final one targets Gmail. 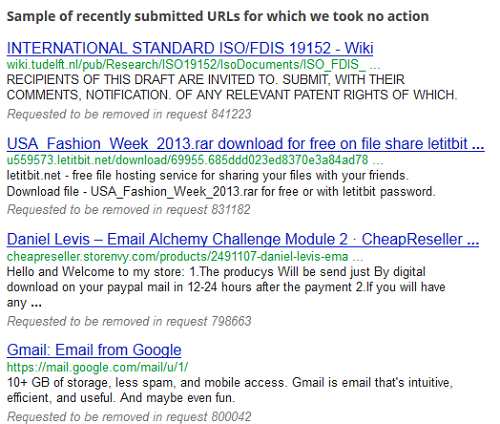 The notice, which can be found here, was sent by a company called Piracy Patrol. It clearly lists https://mail.google.com/mail/u/1/ as an infringing URL. Of course, that cannot sensibly be the case, and Google spotted the mistake on this occasion and on several others (1,2,3).

“I can only say it was human error – and a rather silly one at that,” Piracy Patrol’s Michael Ward told TorrentFreak.

Of course we all make mistakes, but this incident piqued our interest – do other companies also try to take down parts of Gmail in error? It turns out they do.

In an effort to protect its products from piracy, Microsoft Russia has been sending Google DMCA takedown notices over the past year, around 61,400 in total. One of the products it targets is Windows 8 but as can be seen from this DMCA notice and the accompanying image below, Microsoft can make pretty big errors.

Strangely enough, there are even more instances. UK-based anti-piracy company RipBlock has targeted Gmail on many occasions over the past year, the image below illustrates just one. 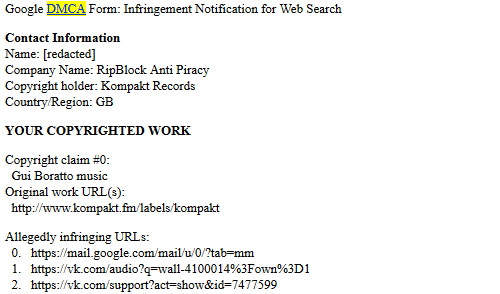 Speaking with TorrentFreak, RipBlock said that the submissions were a genuine mistake.

“It’s a simple case of human error. We are not in any way trying to have parts of Google mail taken down,” operations director Lee explained.

“All URLs we submit to Google for removal are checked by our staff, who do their best to avoid submitting incorrect URLs – but we are human and we occasionally make mistakes. Embarrassing for us, for sure, but that’s all.”

Other companies targeting Gmail during the past year include Czech takedown outfit Netlook (notice).

We’re not sure what would’ve happened if Microsoft or the others had been successful in taking down https://mail.google.com/mail/, but we can’t imagine it would help the operation of Gmail. Fortunately Google appears to be staying sharp.