Google is coping with a continuous increase in takedown requests from copyright holders, which target pirate sites in search results.

Just a few years ago the search engine removed ‘only’ a few thousand URLs per day, but this has since grown to millions. When added up, the numbers are truly staggering.

In its transparency report, Google now states that it has removed 2.5 billion reported links for alleged copyright infringement. This is roughly 90 percent of all requests the company received.

The chart below breaks down the takedown requests into several categories. In addition to the URLs that were removed, the search engine also received 154 million duplicate URLs and 25 million invalid URLs.

Another 80 million links remain in search results because they can’t be classified as copyright infringing, according to Google. 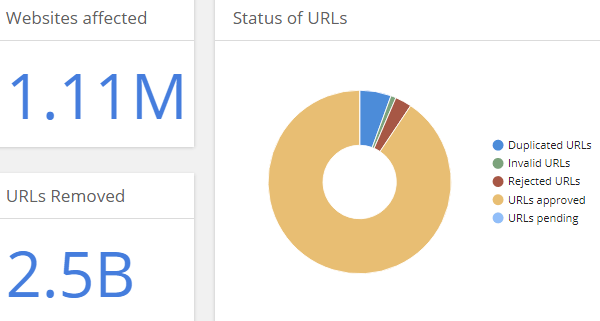 The 2.5 billion removed links are spread out over 1.1 million websites. File-storage service 4shared takes the crown with 64 million targeted URLs, followed at a distance by mp3toys.xyz, rapidgator.net, uploaded.net, and chomikuj.pl.

While rightsholders have increased their takedown efforts over the years, the major entertainment industry groups are still not happy with the current state of Google’s takedown process.

One of the main complaints has been that content which Google de-lists often reappears under new URLs.

“They need to take more proactive responsibility to reduce infringing content that appears on their platform, and, where we expressly notify infringing content to them, to ensure that they do not only take it down, but also keep it down,” a BPI spokesperson told us last month.

Ideally, rightsholders would like Google to ensure that content “stays down” while blocking the most notorious pirate sites from search results entirely. Known ‘pirate’ sites such as The Pirate Bay have no place in search results, they argue.

Google, however, believes such broad measures will lead to all sorts of problems, including over-blocking, and maintains that the current system is working as the DMCA was intended.

The search engine did implement various other initiatives to counter piracy, including the downranking of pirate sites and promoting legal options in search results, which it details in its regularly updated “How Google Fights Piracy” report.

In addition, Google and various rightsholders have signed a voluntary agreement to address “domain hopping” by pirate sites and share data to better understand how users are searching for content. For now, however, this effort is limited to the UK.