Last year, the UK music industry claimed a major victory in its fight against online piracy.

The order aims to make these sites, including Flvto and 2Conv, harder to reach. Many workarounds exist but rightsholders have been particularly frustrated by search engines such as Google including the domains in their results.

Following the blocking order, the BPI asked Google to remove thousands of YouTube ripper links, but this is a game of whack-a-mole; targeted sites actively fight delistings by switching to new URLs.

A few days ago, BPI and PPL broke this impasse. The groups sent a copy of the UK High Court order to Google, requesting removal of the listed domains. While Google isn’t legally obliged to comply, it did so voluntarily, albeit only in the UK. 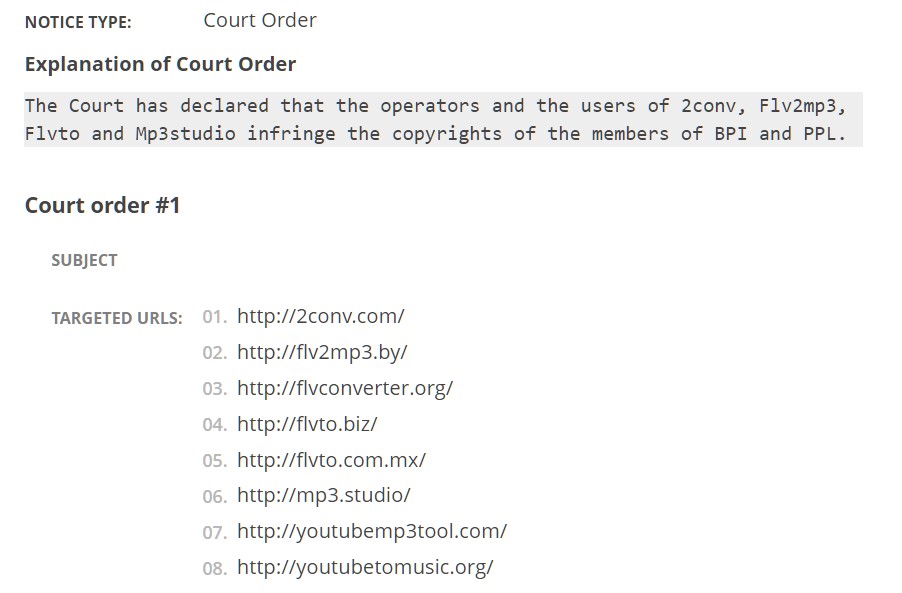 This is not the first time that the search engine has taken action based on a court order targeting a third party. Google has done the same in several other countries, including Australia, Denmark, France and the Netherlands.

The BPI previously requested similar removals in the UK. These included a wide variety of sites including The Pirate Bay, but the YouTube rippers were not mentioned until last week.

Deindexing from search results will make these YouTube rippers harder to find, but the game of whack-a-mole game is far from over as hundreds of other stream-rippers remain readily accessible.

Finally, its worth noting that while the music industry sees YouTube rippers as piracy tools, others see them as neutral services.

The Electonic Frontier Foundation (EFF), for example, wrote an amicus curiae brief in support of Flvto and 2Conv when they were sued for copyright infringement in the United States.

“Like a web browser, photocopy machine, or video recorder, the converters at issue in this case are neutral technologies, equally capable of lawful and infringing uses. And lawful uses abound, from saving a copy of a family member’s home video to downloading clips from a TV show as raw material for a critical commentary,” EFF wrote.

These comments didn’t help the YouTube rippers in question, as they eventually lost their legal battle against the RIAA earlier this year.

Google’s voluntary domain removals are noteworthy because the company openly warned against such measures in the past. In 2015, it told the U.S. Government that whole-site removals would chill free speech and be counterproductive.

The search engine’s position has clearly shifted since its earlier criticism, at least when there’s a third-party court order involved. In a recent presentation to Japanese rightsholders, Google confirmed that it will ‘generally’ remove domains based on third-party injunctions.