Google processes millions of takedown notices every day, most of them filed by copyright holders.

A separate stream of removal demands contains requests by government entities. These are not as common as copyright complaints, but across all Google platforms the numbers quickly add up.

A few days ago Google quietly published its latest Government takedown transparency report. A closer look at the data reveals some interesting trends that reflect some of the global tensions where Russia takes center stage.

During the first half of 2022, Google received 35,221 takedown requests from governments, targeting 387,152 items. This includes search engine links but also YouTube videos and articles on the Blogger platform.

These numbers don’t say much in isolation. However, when we look at the country breakdown it becomes apparent that the vast majority of the requests come from Russia. From January to June, the country sent 21,841 takedown requests targeting 244,282 items. That’s 62% and 63% of the worldwide totals respectively. 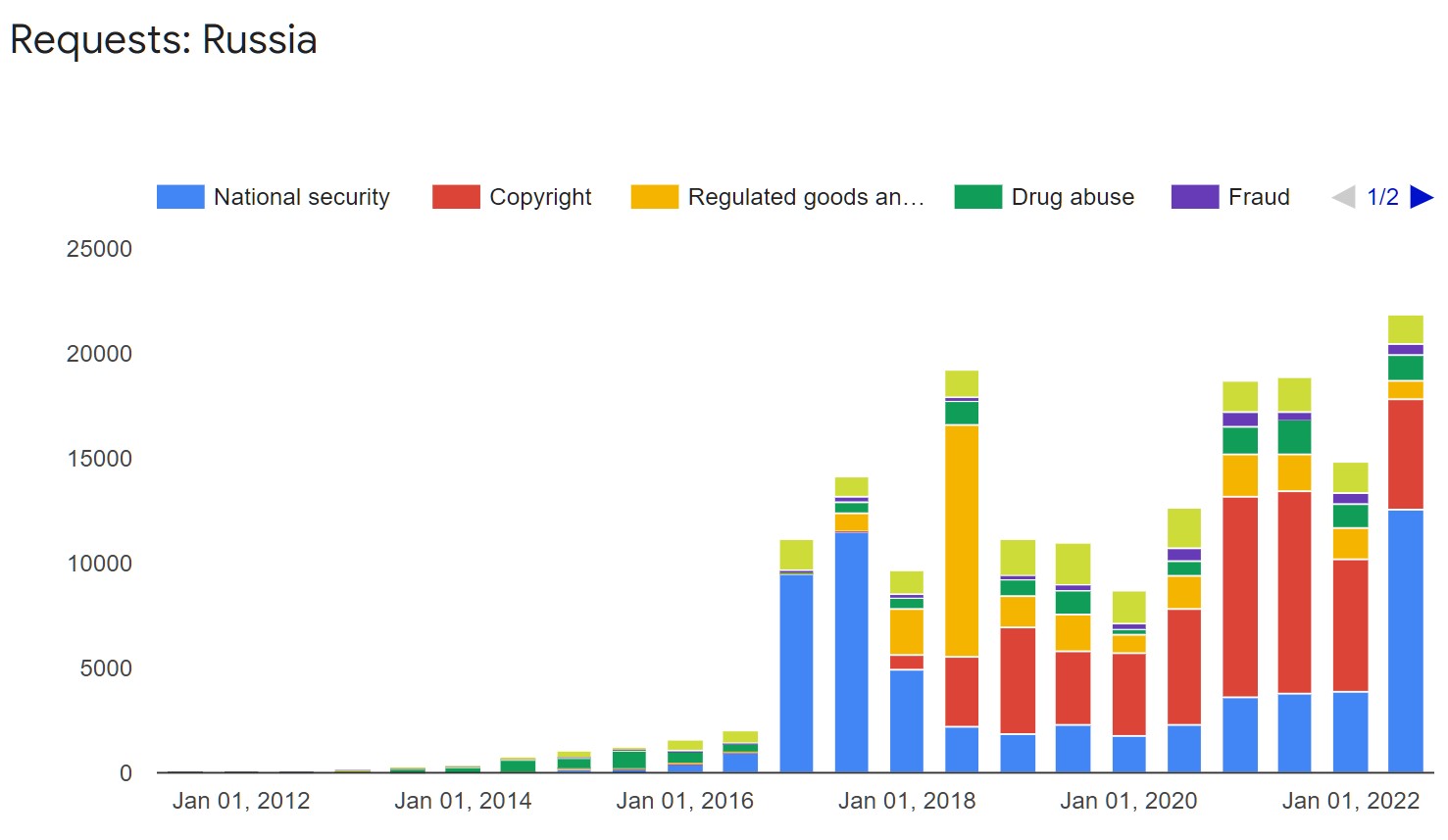 These high percentages are indeed notable, but it’s worth mentioning that the Russian Government has been the top takedown sender for a few years already. What stands out most is how Google responded to the recent requests.

During the previous reporting periods, Google complied with most of Russia’s takedown demands. On average, roughly 10% of the notices resulted in “no action taken,” which signals that there’s something wrong with these demands.

Over the past half year, this trend changed dramatically. As seen below, Google now rejects most takedown demands from Russia. More than 71% of all requests resulted in “no action taken”. That’s a drastic change that appears to be in part triggered by the Ukraine conflict. 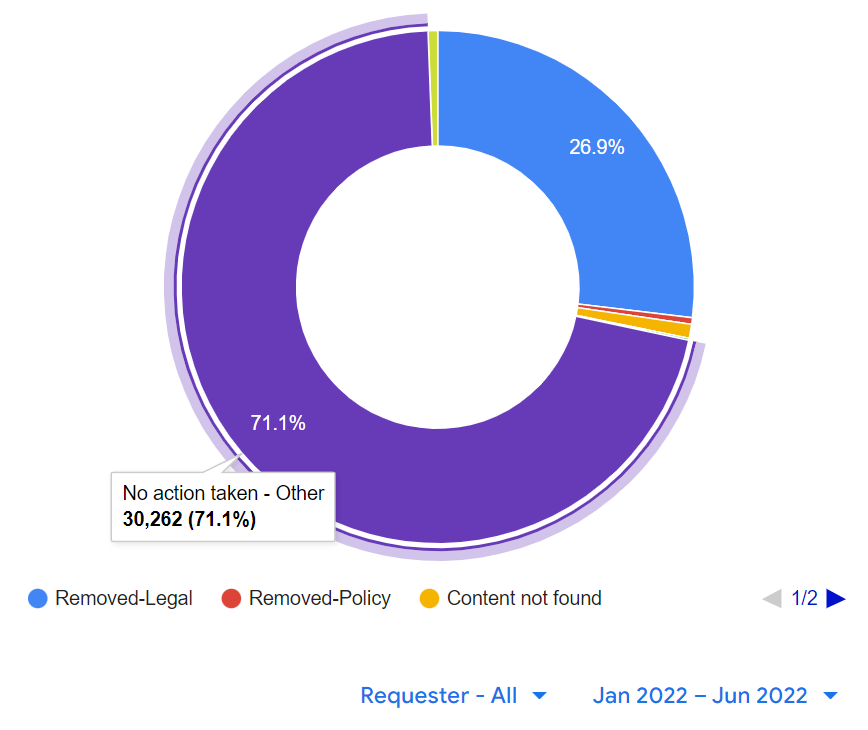 Some of these questionable takedown requests have already made headlines. For example, YouTube refused requests from Russia’s telecoms watchdog Roskomnadzor to remove 27 YouTube URLs, most of which relate to the war in Ukraine. The content included political speeches, news coverage, and commentary that Google wasn’t willing to take offline.

Russia wasn’t pleased with this refusal and a local court fined Google $372.5 million, a decision that’s still under appeal.

This high-profile example is just one of many. In the latest transparency report, Google provides several other takedown examples that have raised questions. They include videos calling for protests against Russia.

“We received requests from Rosco against 12 videos and 2 channels on YouTube calling for protests in Russia. The calls for protests were sparked by a general dissatisfaction with the current government,” Google writes, adding that it took down five that called for violence, leaving the others untouched.

Russia also attempted to have the apps from news outlets Dozhd and Echo of Moscow removed from the Play Store because it didn’t agree with its reporting on the Ukraine invasion.

“We received requests from Roskomnadzor to remove from the Google Play Store the apps of media outlets Dozhd and Echo of Moscow. Roskomnadzor claimed that both apps ‘purposefully and systematically’ distributed false information about the war in Ukraine, including about how many Russian soldiers and Ukrainian civilians have died.”

Google says that it refused to comply with the request because it could not properly verify the claim. The same is true for Russia’s request to take down a Compute Engine website that reports the number of civilian casualties in Ukraine.

“We received a request from Roskomnadzor to remove a Compute Engine site that seeks to document casualties among the civilian population of Ukraine,” Google writes, adding that it didn’t remove the site “in part because the grounds for removal were not clearly linked to the content of the site.”

The information shared by Google shows that the rise in “national security” removal requests is partly triggered by the Ukraine invasion. Russia clearly doesn’t agree with a lot that’s said and reported online, and aims to control the narrative.

Russia’s removal demands are not limited to the figures highlighted above. In 2017, the country also introduced a law that requires Google to remove links to VPNs, Tor, anonymizers, and proxies from its search engine.

This legislation is part of an initiative that requires ISPs and search engines to block pirate sites and online publications that are deemed problematic by Russia’s standards.

Google reports takedown requests under this “VPN law” separately. In the first half of 2022, Russia’s telecoms watchdog made 225 requests to remove a total of 682,612 URLs. Most of these were indeed delisted by the search engine.

Interestingly, the above means that the number of items targeted through the VPN law is actually greater than those detailed in regular takedown requests.

A full overview of Google’s transparency report is available here.