The company had been running around Twitter and other social media platforms admonishing and bullying individuals who had dared to quote a poem by a guy called Shaun Shane.

“If only our tongues were made of glass,” the single line composition began, “how much more careful we would be when we speak.”

For kicks, Cushing even administered some troll-bait of his own, which was duly gobbled up by On Press who sent the Techdirt writer similar threats and referred to him as “stupid” and “idiotic” for good measure.

Of course, before long word started to spread. Among many others Rob Beschizza covered the story for BoingBoing only to get threatened too.

The irrepressible Ken White at Popehat also joined in on the fun, describing the brains behind the On Press campaign as having “a grasp of law cobbled together by listening to 13-year-olds swearing at each other on Xbox Live.”

A fuss even broke out in the comments section of a Michael Geist article covering a completely different topic after an On Press shill stepped in to inform a poster who dared to align the words of the Shane poem with the acts of an anti-piracy lobby group.

But while things may have gone quiet since, the whole sorry episode is about to blow up again.

Earlier this month TorrentFreak discovered that On Press had filed a DMCA notice with Google against one of our articles, asking the search engine to delist it from the company’s search results. The article was about Twitter copyright complaints but buried away in the comments section was a few paragraphs from Gene Poole, who said the following: 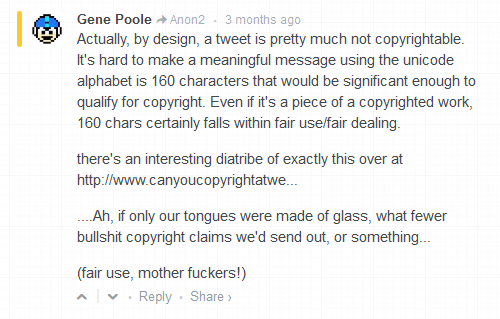 Shane was clearly back, more crazy than ever before – and he wasn’t finished yet. In the same DMCA notice On Press targeted a who’s-who of its critics from earlier in the year.

Perhaps unsurprisingly Techdirt was on the top of the hit list, with Google being ordered to remove a total of 43 URLs that On Press (incorrectly) claimed were infringing copyright, which bizarrely included a URL designed to call up all articles on the site which contained the words “legal” and “threat”.

Adding to the catastrophe, On Press ordered Google to remove the articles written by Rob Beschizza and also Michael Geist, even though the latter was on an unrelated topic. Quite deliciously, mainly because we can’t wait for the Popehat reaction, On Press also ordered Google to censor Ken White’s article.

But aside from the notice’s very existence, what was important to us was Google’s reaction to it. That response has just come in and it shows just how misguided On Press are when it comes to copyright law.

So far Google has deemed just 16 URLs to be infringing and has refused to remove 91 others, including all of the articles on Techdirt, Popehat, BoingBoing, Michael Geist’s blog and TorrentFreak. A decision on 27 URLs is still pending, quite possibly sitting on the desk of a Google lawyer who has much better things to spend his time on.

If only On Press Inc’s DMCA agent had a tongue made of glass, we wouldn’t have to listen to their nonsense anymore.