The entertainment industries’ quest to root out piracy on the Internet has yet again resulted in commercial censorship. A few weeks ago Google announced that it would start filtering “piracy related” terms from its ‘Autocomplete‘ and ‘Instant‘ services and today they quietly rolled out this questionable feature.

Without a public notice Google has compiled a seemingly arbitrary list of keywords for which auto-complete is no longer available. Although the impact of this decision does not currently affect full search results, it does send out a strong signal that Google is willing to censor its services proactively, and to an extent that is far greater than many expected.

Among the list of forbidden keywords are “uTorrent”, a hugely popular piece of entirely legal software and “BitTorrent”, a file transfer protocol and the name of San Fransisco based company BitTorrent Inc. As of today, these keywords will no longer be suggested by Google when you type in the first letter, nor will they show up in Google Instant.

All combinations of the word “torrent” are also completely banned. This means that “Ubuntu torrent” will not be suggested as a user types in Ubuntu, and the same happens to every other combination ending in the word torrent. This of course includes the titles of popular films and music albums, which is the purpose of Google’s banlist.

TorrentFreak contacted BitTorrent Inc. for a reaction, and Simon Morris told TorrentFreak that he believes the scope of this filter is too broad.

“We respect Google’s right to determine algorithms to deliver appropriate search results to user requests. That being said, our company’s trademarked name is fairly unique, and we’re pretty confident that anyone typing the first six or seven letters deserves the same easy access to results as with any other company search,” Morris said.

“A quick search for ‘BitTorrent’ currently returns a variety of legitimate and useful links, including company information, our software, our open-source protocol, and more. What Google may not realize is that our technology is used for many purposes that provide significant value to the technology industry, companies, artists and consumers at large,” he added. 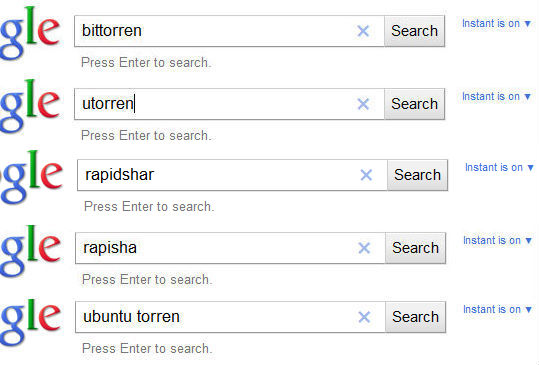 What is most surprising about the new filter is that the keywords appear to be picked arbitrarily. It includes BitTorrent clients such as uTorrent and Xunlei, but not BitComet and Vuze. While cyberlockers such as RapidShare and Megaupload are banned, prominent sites such as 4shared, HotFile and MediaFire are not.

In addition, all the names of popular torrent sites including The Pirate Bay are not included in Google’s banlist either. BitTorrent’s Simon Morris agrees that this is odd, to say the least.

“There’s no reason for Google to throttle search results for our trademarks, including BitTorrent, µTorrent and torrent. Indeed, they do still enable autocomplete for many third-party clients that use the BitTorrent protocol, including BitComet, BitLord, and even sites like The Pirate Bay and Isohunt.”

Morris further points out that the inclusion of Xunlei is a little hypocritical since Google is one of the investors in the Chinese BitTorrent client.

“We’d also like to point out that while Google doesn’t enable autocomplete for Xunlei (China’s largest software client that uses the BitTorrent protocol) Google did invest $5 million in the company in 2006, according to reports,” Morris says, adding, “We sincerely hope Google will recognize the value of BitTorrent and reevaluate this decision expeditiously.”

RapidShare is not pleased with Google’s new filter either, at least not with its current scope in today’s roll-out.

“We knew about Google’s plans for quite a few weeks now. We embrace that certain search suggestions will not put a wrong complexion on RapidShare anymore, but we are concerned that at the same time the legitimate interests of our users will also be affected. We believe it was the wrong decision to remove the term ‘RapidShare’ from the search suggestions,” RapidShare told TorrentFreak.

“RapidShare is one of the most popular websites worldwide. Every day hundreds of thousands of users rely on our services to pursue their perfectly legitimate interests. That is why Google has obviously gone too far with censoring the results of its suggest algorithm. A search engine’s results should reflect the users’ interests and not Google’s or anybody else’s,” the company added.

Indeed, RapidShare has certainly touched a nerve here. It is clear that this filter is the result of pressure from the entertainment industries, which is not at all in the interests of users. Now that Google has begun proactively censoring their services for commercial reasons, more companies will demand the same. At the same time, the entertainment industries will continue to pressure Google to go even further, and censor the actual search results.

Apparently Google has decided that its users should not be searching for the keyword BitTorrent, so why list any results then? It’s the beginning of the end.

Jamie King, the founder of Vodo – a platform where artists can share their work with million of people at no cost – agrees with this assessment. Searching for one of their perfectly legal releases on Google used to suggest the word “torrent” with a link to the download page, but not anymore.

“I guess it’s simple: our favorite search monopoly cares less about helping the thousands of independent creators who use BitTorrent to distribute legal, free-to-share content than they do about protecting the interests of Big Media in its death throes.”

Indeed, Google is going down the wrong path by willingly and broadly censoring its services to please a few big companies. This is not the way to get rid of piracy, it’s the way to a corporate controlled Internet. Google may have been proud to leave China because of its political censorship, but it should be ashamed of promoting commercial censorship worldwide.