While many sites comply with DMCA-style takedown requests in order to maintain their ‘safe harbor’ status, sites such as The Pirate Bay routinely refuse to take anything down.

For a long time there was little that could be done to stop casual users from subsequently finding content on sites like TPB by using regular search engines such as Google. However, during the last couple of years a growing movement has sought to do just that, not just against sites like TPB, but against all domains, no matter what their copyright policies.

Although Google regularly posts takedown requests it receives to the Chilling Effects Clearinghouse, the scale of the issue had largely been hidden. That changed with the publication of the company’s Transparency Report earlier this year.

What that continually updated database shows today is a huge and increasing effort by rightsholders to have links to copyright content hidden from the prying eyes of Google searchers on a scale never seen before.

Last month we reported that Google had just received a record number of URL takedown requests in a seven day period. In the week starting July 9, Google was asked to take down 719,416 URLs, up from the previous weekly record of 609,800 set in June.

Following that article the bar was raised again during the week starting July 17. A total of 736,477 URLs were taken down, but two weeks later another huge batch would eclipse even this record.

In the week starting July 23, rightsholders asked for 1,107,659 URLs to be taken down, an increase of more than 50% on the previous weekly record. But amazingly even this record was about to be smashed. 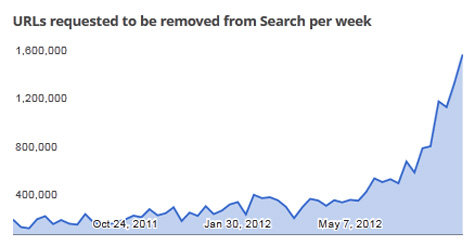 Google says that during the last four weeks it was asked by 1,825 copyright owners and 1,406 anti-piracy reporting organizations to remove 5,733,402 URLs across 32,545 domains, truly huge numbers which on recent trends look likely to increase.

While Google’s Transparency Report provides a much-valued window into the world of DMCA takedowns, it has also raised awareness among rightsholders. As can be seen from the graph above, takedown requests were fairly steady until May when the report was first published and now the stats have gone through the roof.

Finally, while the report highlights a serious business it still manages to entertain. A notice here (line 40) sent by Microsoft orders Google to takedown a URL linking to an infringing copy of Windows 7 – listed on Bing.

Another, which is possibly the most confusing so far, sees a woman asking Google to delist a mugshot of someone who isn’t her.

“This image contains my personal date of birth, height and weight but the name is incorrectly spelled and the picture is not me,” she writes.

“The registered owner of the site is Mr. Watson PO Box 1571 Clarksburg Wv. As you know Mr. Watson is Sherlock Holmes fictitious sidekick and Clarksburg Wv is the home to the FBI. Something is suspicious with this site and it’s owner,” she concludes.

In a sign that Google doesn’t always comply with takedowns, the mugshot of someone who isn’t the person requesting the takedown (and presumably didn’t take the picture) remains intact.