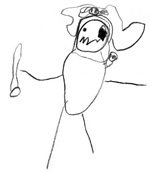 We have recently reported on the situation in the UK where charities and even police forces are threatened with legal action for playing music within earshot of the general public. Hollywood is no stranger to strict royalty collection activities either, and has stooped to a new low.

The Motion Picture Licensing Company (MPLC), which is charged with collecting royalties for the big studios, recently wrote to 2,500 kindergartens (or playschools as they are known in Ireland), informing them that it is illegal for the kids there to watch DVDs without an appropriate license.

According to The Times, the letter was sent with the knowledge of the Irish Preschool Play Association (IPPA), which represents many schools populated by around 50,000 kids between 3 and 5 years of age. The IPPA had worked out a deal with the Hollywood representatives, and eventually managed to get the royalties down to 3 euros per child.

Despite the lowered fee, most kindergarten owners were stunned by the request. Paula Doran, who runs a playschool in Dublin, said that the kids hardly watch any DVDs at the kindergarten. “We would rarely show DVDs anyway because it’s frowned upon — kids get enough TV at home,” she said. In fact, the only time the kids are allowed to watch a DVD is when they are pretending to go to the cinema, a learning activity that Hollywood would fully endorse. Doran said she couldn’t understand how the MPLC could be acting legally, and refused to pay.

It turned out that she was absolutely right not to pay. The MPLC actually failed to register with the Irish Patent Office, and by demanding payments in the way they have, breached the 2000 Copyright Act. A spokesman from the IPO confirmed that an organization that acts in this manner could be fined or have its staff jailed.

The MPLC belatedly applied for a license to collect the royalties on Friday. It’s never too late to learn, or for the kids, never too early to start filling Hollywood’s pockets.

Cloudflare Flags Copyright Lawsuits as Potential Liabilities Ahead of IPO