Just one week ago a new piece of software hit the file-sharing scene. Utilizing BitTorrent under the hood, Torrents-Time aims to bring embedded streaming functionality to any torrent index.

The first project to utilize the software was Popcorn-Time.io, a browser-based version of Popcorn Time employing peer-to-peer transfers.

Just days later and The Pirate Bay had jumped on board, placing links to Torrents-Time on all of its video torrents and effectively transforming the notorious site into the world’s largest streaming portal overnight.

The development attracted a lot of attention so it will come as no surprise that Torrents-Time is already on Hollywood’s radar. That manifested itself in direct attention from Dutch anti-piracy group BREIN, who have now issued Torrents-Time with its first legal threat.

“BREIN issued a cease and desist letter to us on the grounds that it’s a known fact that Torrents Time is facilitating the distribution of infringing content,” the Torrents-Time team informs TorrentFreak.

In its letter to the group behind TT, BREIN is certainly forceful in its assertion that the software is illegal.

“By offering Torrents Time, which is primarily engaged in the facilitating, enabling and participating in the making available of infringing files, according to the law and jurisprudence of The Netherlands you are acting unlawful and infringe the copyrights and neighboring rights of others, including the rights holders whose interests are represented by BREIN,” lawyer Pieter Haringsma writes.

“This causes extensive damage to rights holders for which you – and all others involved with the management of the site – are liable. In the interest of and on behalf of the rights holders represented by BREIN, we request that you cease and desist the distribution of Torrents Time immediately.” 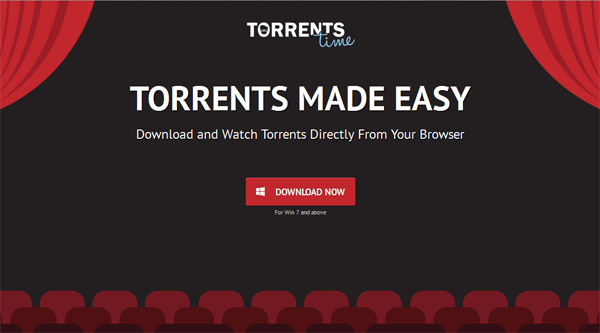 BREIN’s involvement indicates that Torrents-Time (TT) has connections to the Netherlands, a situation confirmed by its developers.

“The Dutch connection is due to our website being hosted on a server residing in the Netherlands,” TT informs TF.

Indeed, Torrents-Time is currently hosted at LeaseWeb, a major Dutch-based service provider that has been embroiled in many file-sharing related legal battles in the past. And, according to BREIN, if TT refuse to comply LeaseWeb will be sucked into this complaint too.

“If you do not comply in full with our demands set out in the above, we will contact your Hosting Internet Service Provider and request again for the immediate removal of the website from the Internet and for your name and address details. Under the law of The Netherlands your provider is obliged to comply with these demands,” Haringsma continues.

“We will of course hold you liable for all (further) incurred costs including legal fees. These costs can be substantial. Given the circumstances at hand, the courts of The Netherlands have jurisdiction over this matter.”

This style of approach to Torrents-Time is pretty standard for BREIN which routinely issues threats to local service providers who generally comply by shutting torrent sites down. However, this situation is perhaps not as straightforward as it first appears.

While there is an argument to be had over the way Torrents-Time is being promoted on sites like The Pirate Bay, at its core it is simply a software client and it is for the software’s users to decide whether they use it for legal or illegal purposes. None of this is lost on the Torrents-Time legal team who have responded extremely aggressively to BREIN’s claims and even question the anti-piracy group’s validity.

“From the outset, please be informed that my clients deny all the suppositions and assumptions in your letter, including the fact that BREIN represents right holders and that you are qualified to take action on behalf of an un-named un-identified entities,” TT begins.

“In your letter, you take the liberty of accusing my Clients of distributing an ‘illegal application’. We deny that allegation, as being un-substantiated, false and illegal in itself, under the laws of the Netherlands.

“No court has ever ruled that Torrents Time breaches any right of any sort, including copyrights and neighboring rights, for two main reasons: One: It was published less than 3 days ago, and two: It was carefully crafted not to do anything whatsoever so as to breach copyright or neighboring rights.

“In accordance with the technical details referred to me by my Clients’ engineers and software specialist, I am confident that the outcome of a court proceeding against my Clients’ Torrent Time will end with a ruling against anyone who challenges the legality of Torrents Time,” TT’s legal team adds.

And then the tone of the response to BREIN changes, from stating facts to Torrents-Time making threats of their own.

“You are therefore advised to seriously re-think you cease and desist demand and advise my Clients that you withdraw your demands. You are also hereby warned not to attempt to take action against any third party who utilizes Torrents Time or hosts it or co-operates therewith in any other manner,” the response warns.

“Failing to comply with my demands herein will prove itself as enormously costly to your organization and its members and could lead to criminal proceedings against yourself, on the grounds of illegal threats and extortion, the consequences of which I’m sure you are very well aware of.”

It is extremely unlikely that BREIN will heed the advice offered by Torrents-Time so an approach to LeaseWeb to take their site down will happen soon, if it hasn’t already. TorrentFreak asked BREIN how Torrents-Time differs from any other torrent client but we are yet to receive a response. Maybe that will be an argument they’ll continue with LeaseWeb during the days to come.

“As we believe that the complaint is an illegal act of blackmail, we will resist and fight back. We have taken legal advice and will take whatever steps are best for us,” the Torrents-Time team concludes.