There can be little doubt that in recent months the Popcorn Time phenomenon has been turned on its head, with legal action by the MPAA just one of the concept’s problems.

Since the breakup of the PopcornTime.io team there has been much jockeying behind the scenes, with various groups trying to variously revitalize and take control of new forks and development. Very little of this activity has led to innovation.

However, while all of this has been underway the most popular remaining fork – Popcorn-Time.se – hasn’t been sitting on its laurels. While keeping out of the various squabbles, this fork has been quietly innovating in the background. Today we bring news of a development that has the potential to inject a whole new wave of enthusiasm into the format.

Several times in the past year developers have launched sites which appear to allow Popcorn Time to run in a browser. However, instead of utilizing the BitTorrent architecture that powers the Popcorn Time app, these simply grabbed content from swarms and delivered them to users via HTTP. With many thousands of users, bandwidth quickly ran out and most of these websites bit the dust.

A new third-party system already being utilized by the folks behind Popcorn-Time.se aims to do things differently and they have a demo site up to demonstrate their vision for the future. 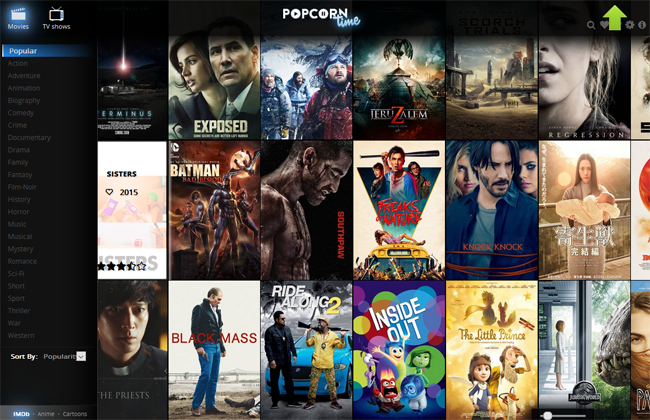 As can be seen from the image above, Popcorntime-Online.io looks very much like other browser-based versions of Popcorn Time. However, instead of delivering content to users via expensive HTTP, the site relies on a special plug-in called Torrents-Time which effectively embeds a torrent client into the browser.

Available for now on Windows 7 and above, the Torrents-Time plug-in allows Popcorntime-Online.io to embed Popcorn Time content in every major browser, although in fact any torrent video can be displayed.

“The Torrents Time plugin contains 2 parts: A torrent-client engine, based on the Libtorrent library and a video player which is completely 100% written by us, which utilizes FFmpeg. It encodes most of the known video formats,” the team informs TF.

For those wondering how Torrents-Time obtains peers, the client can function with regular trackers and also utilizes PEX and DHT when necessary. The other key features of the Torrents-Time system are shown below.

The claims of ‘instant’ streaming couldn’t be matched in our early tests with videos taking up to a minute or two to buffer sufficiently to allow playback. However, once the initial wait was over the video appeared as promised with smooth delivery and decent audio. Multi-language subtitles complete the basic viewing package.

The Torrents-Time service currently utilizes Anonymous VPN as its privacy provider. They claim to have a no logging policy. However, Torrents-Time say they are open to working with other suppliers too.

“We invite every VPN provider to contact us, as we appreciate that anonymity is one of the most important features for users’ privacy,” they add.

There was a bug in the casting feature which meant we could not test it, but the team says an update will be launched in a few hours which will fix the issue. In the meantime, some tech specs for the geeks.

Torrents in the browser have been expected

With the impressive WebTorrent waiting in the wings, browser-based BitTorrent streaming is a highly anticipated development and a much needed solution to resource-hungry HTTP transfers. With this in mind the debut of the Torrents-Time-powered site Popcorntime-Online.io is an important event.

Interestingly, however, another site appeared late 2015 offering similar functionality. PopcornTorrents.com also embeds video in the browser but instead uses technology provided by Hola, details of which can be found here. Readers will remember Hola being in the news last year due to controversy over the way the service operates.

There’s no suggestion whatsoever that Torrents-Time is involved in similar practices, but the service does aim to branch out commercially in different ways, as its notes to publishers explain.

“By harnessing the incredible abilities of torrents, you can transform your website, in a matter of seconds to an amazing, simple to use streaming website! And by doing so, you will expose your website to new user segments, while massively increasing time on site and the number of user interactions on your website,” the company explains.

“We’re starting a revolution in a field that has never been revolutionized before – the way download, streaming and torrents websites monetize their traffic! With Torrents Time you’ll be able to generate more revenue than with any PPI company or ad network, while maintaining a great, worthy relationship with your awesome users.”

If Torrents-Time lives up to its claims and gains traction as promised there could be a massive wave of easy-to-setup websites utilizing its technology in no time at all. Taking them all down could prove impossible. Time to get the popcorn out.