How to run uTorrent in Mac OS X

If you don’t like torrents try MP3 Search. The site carries in excess of 50,000 albums from 46,000 artists. Prices start at $0.19 per track. Most tracks are in high quality bitrate, 320 kbps. The site accepts major credit cards.

uTorrent is currently only available for Windows. But that isn’t going to stop us from running it in OS X.

We currently have two ways of doing this. The first and more obvious way to do this would be to install Parallels and just run it as we would any other Windows program. The second is with an exciting new program (not so new for Linux users) called CrossOver. CrossOver is still in beta, but is already a very usable and stable alternative to installing a copy of the entire Windows operating system on your Mac, which is essentially what you’re doing when you run Parallels.

So, here’s what you need to do:
Sadly, CrossOver only works on Intel-Macs, so don’t try this on a PPC one (I won’t be responsible if it blows up in your face :-P).

Waitasecond, slow down. There are still some things you need to know…

The file structure that you see while trying to download a torrent is a tad confusing. You see, CrossOver tricks programs into believing that there’s a C: drive on your Mac, when there actually is none.
Make sure you do not save your files in the C: drive. You can get to your user folder by choosing: 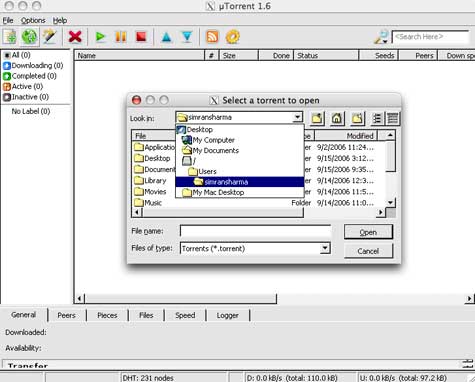 Another annoying thing is the fact that you can’t just untick files you don’t want when trying to download selectively. You have to right-click on the file and choose “select” or “deselect.” But seriously, do I really want to run a BitTorrent client that has to be emulated through CrossOver? No. For me this was just a fun side-project. Just like attempting to run IE6 in OS X. A major drawback is that CrossOver hogs too much RAM to be able to constantly run in the background. The day there’s something like Rosetta for Windows applications, it’ll open up a whole new market to developers. Even better would be a Mac-version of uTorrent, which is incidentally in the developer’s plan of action.

Have you tried running uTorrent in OS X? Do you think it’s worth the trouble? We want to know.