How to Unblock Websites For Free and Why it Feels Good

Have you ever noticed that when someone tells you what to do – or what not to do – you have a somewhat natural tendency to go against their instructions?

In psychology it’s called ‘reactance’ and is something which occurs when we believe that someone’s orders, mechanisms, rules or regulations are about to narrow our options or limit our behavioral freedoms.

I love incredibly hot sauce (such as Dave’s Insanity Ghost Pepper Sauce) even though it leaves me bent up in pain if I have too much, which incidentally is anything more than a few drops. On the label of these sauces it often orders you NEVER, EVER under ANY circumstances to consume the sauce neat.

The problem is that there is something inherently annoying about someone we don’t know trying to impose their will on us when we are perfectly capable of making our own decisions. Not only do we inexplicably want the forbidden item even more than before, we kick back and build up resentment against those attempting to restrict our freedoms.

For example, I’ve never commented on a YouTube video before but the idea that Google wants to force Plus down our necks in order for us to do so fills me with rage, to the point where i’ve even signed the petition.

All kinds of Internet restriction has this effect on me. Every time news breaks that another site has been blocked I have an overwhelming desire to make sure I can still access it, even though I may never have visited it in the past and have no intention of doing so in the future.

That said, once the “This Site Has Been Blocked” message appears there’s nothing more immediately satisfying than unblocking it, a feeling that parallels the challenging of “don’t touch, wet paint” when it turns out to be dry after all.

The good news is that satisfaction is just a few clicks away for anyone who wants it and it doesn’t have to cost a penny either. Here are a few of the most simple solutions that will take a maximum of five to ten minutes for a novice to setup.

PirateBrowser is a simple tool provided by the operators of The Pirate Bay. It allows anyone to quickly and simply circumvent ISP and government web blocking.

The software is Tor-based and includes a version of the popular Firefox browser which should be used when a site needs to be unblocked. By mid October the tool had achieved around one million downloads and according to Alexa is most popular among users in South Korea.

PirateBrowser can be downloaded here

Tor is perhaps the most famous tool to unblock websites, avoid censorship and maintain privacy. It was originally designed and implemented by the U.S. Naval Research Laboratory for protecting government communications.

Today it used by people such as whistleblowers, journalists and activists who may need to keep their identities secret. It is also used by those looking to access censored webpages, hence its inclusion in this list.

Tor can be downloaded here 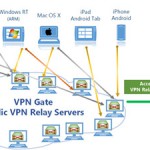 A VPN is a group of computers networked over the top of the world’s largest network – the Internet. Communications are encrypted so VPNs are useful for maintaining privacy and, of course, unblocking blocked websites.

There can be no doubt that paying a few dollars per month for a premium account is the best option for those who have the money, but basic and completely free options are available.

Perhaps the most interesting one is offered by the Graduate School of University of Tsukuba, Japan. The VPN Gate Academic Experiment Project launched earlier this year aiming “to expand the knowledge of Global Distributed Public VPN Relay Servers.”

Like all technologies listed in this article, it’s not necessary for beginners to understand how they work, just that they do. Unlike Tor, don’t expect total privacy with VPN Gate but be assured that the service unblocks websites just fine.

VPN Gate can be downloaded here.

In the wake of the censorship of torrent sites in the UK, the Netherlands, Italy, Denmark and other countries around Europe, special sites started to appear. Known as ‘reverse proxies’, these webpages access blocked sites and feed the content back to their own pages. To visitors accessing the reverse proxy, the blocked site appears as normal.

There are hundreds of these available, such as the selection available on PirateReverse.info and Come.in. However, some reverse proxies themselves have become subjected to censorship, meaning that they too are blocked at the ISP level, in the UK, the Netherlands and Belgium.

General webpage proxies are sites which can unblock most websites online via a simple interface. By simply entering the URL of the blocked website into the search box of the web proxy, the blocked site will become accessible.

There are hundreds of these web-based solutions which can be uncovered by a simple Google search, although some are overloaded with adverts and cluttered interfaces.

On the plus side they’re all free so have a browse around and find one you like. Some are available as a browser extension, which makes them even easier to use.

You are hereby ordered NOT to try any of these solutions – EVER – and if you have any of your own solutions you will REFRAIN from posting them in the comments section below.