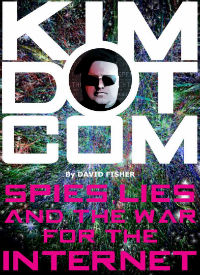 Few people would disagree that Kim Dotcom is a fascinating man. After his file-sharing service Megaupload was raided early 2012, Kim Dotcom became an instant Internet celebrity.

The success and controversy surrounding Megaupload as well as Dotcom’s personal life in the years leading up to the raid are now detailed in a biography.

Written by David Fisher, “The Secret Life of Kim Dotcom – Spies, Lies and the War for the Internet” reveals intimate family details, but it also provides additional details on Dotcom’s perception of the Megaupload raid, and how the entertainment industry dealt with the site before it was taken down.

Some of these details are being published for the first time, including Kim Dotcom’s suspicions that his support for Wikileaks was one of the main reasons for the U.S. Government to go after him.

In the book Dotcom explains that he donated €20,000 to Wikileaks after the Collateral Murder video came out early 2010. It’s a controversial allegation, but Dotcom believes that it is no coincidence that the prosecutor who investigated Julian Assange was also appointed to the Megaupload case.

The passage below is taken directly from the book, with permission from the publisher.

Dotcom believes one of the reasons he was targeted was his support for Wikileaks founder Julian Assange. He says he was compelled to reach out to the site after US soldier Bradley Manning leaked documents to it. The infamous video recording of the Apache gunship gunning down a group of Iraqis (some of whom, despite widespread belief to the contrary, were later revealed to have been armed), including two Reuters journalists, was the trigger.

“Wow, this is really crazy,” Dotcom recalls thinking, watching the black-and-white footage and hearing the operators of the helicopter chat about firing on the group. He made a €20,000 donation to Wikileaks through Megaupload’s UK account. “That was one of the largest donations they got,” he says. According to Dotcom, the US, at the time, was monitoring Wikileaks and trying better to understand its support base. “My name must have popped right up.”

The combination of a leaking culture and a website dedicated to producing leaked material would horrify the US government, he says. A willing leaker and a platform on which to do it was “their biggest enemy and their biggest fear . . . If you are in a corrupt government and you know how much fishy stuff is going on in the background, to you, that is the biggest threat — to have a site where people can anonymously submit documents.”

Neil MacBride was appointed to the Wikileaks case, meaning Dotcom shares prosecutors with Assange. “I think the Wikileaks connection got me on the radar.”

Dotcom believes the US was most scared of the threat of inspiration Wikileaks posed. He also believes it shows just how many secrets the US has hidden from the public and the rest of the world. “That’s why they are going after that so hard. Only a full transparent government will have no corruption and no back door deals or secret organisations or secret agreements. The US is the complete opposite of that. It is really difficult to get any information in the US, so whistleblowing is the one way you can get to information and provide information to the public.”

The book doesn’t offer more details to substantiate Dotcom’s claims, but it’s clear that the New Zealand entrepreneur sees Megaupload’s takedown as more than just “a favor” to Hollywood and the major record labels.

In addition to the Wikileaks angle the book also describes tense pre-raid relationships between Megaupload and various copyright holders. As Dotcom previously told TorrentFreak, several players in the entertainment industry, including Disney, were eager to partner with the file-sharing empire.

On the other hand, however, the major record labels and Hollywood also actively frustrated attempts by Dotcom to license content for his Megabox and Megamovie ventures. The passage below describes the tense relationship in detail.

While Hollywood executives railed against the company in public, they were privately finding ways to engage with the business. There were emails from studios, looking for ways to work with Megaupload that would see their content hosted on the website. “Disney proposed to us a contract of co-operation where there were some conditions in there we simply couldn’t accept. They wanted to use us as a distribution platform (but) they just had completely bizarre ideas of how that would work. They would basically take control of the whole process.”

Ideas from the studios included allowing old or little-known new content to find its own life on Megaupload. The old content could be linked to new content which would be paid for, while new artists with low public profile would be able to build a fan base through viral appeal. “For us it was bizarre, on the one hand, they were like wanting to do something with us and being nice and thanking us for all the co-operation. You would never think they would go and try and start criminal action against us.”

Dotcom said he struggled to understand why Hollywood and the record Industry Association of America spent so much effort on attack when there were easier ways to manage the evolution of copyright on the internet. An outlay of up to $2 million would fund the development of a call centre — he suggested India or the Philippines. “You employ say 50 to 100 people, and you train them to look for infringing links all over the internet.” The centre would develop search skills ranging from the ubiquitous google to sites dedicated to infringing content. He said with the funding of “a relatively small investment” and the use of available tools like the Digital Millennium copyright Act “they could have sorted this piracy problem out”.

In the months leading up to the destruction of Megaupload, there was a growing friction between it and the copyright industry. Megaupload was bigger and bolder than ever, talking of new business plans which cut across territory considered by the copyright industry to be traditionally theirs. One of those ventures was MegaMovie, intended to be an online database of films. There was also MegaBox, the proposed music site which would allow users to buy tracks from popular artists — but also allow artists to sell directly to the public.

“I was having meetings with Hollywood producers trying to establish communication and trying to work with them. I wanted to license content for MegaBox from the music labels.”For each move Dotcom made, the copyright industry would make another to head him off. When Megaupload agreed a deal with a company which held the database of cover art for CDs, the deal was sunk by the recording industry. “They stopped us from becoming a proper licensor of their content and their cover art. They didn’t even allow us to become a partner.”

While Hollywood was keeping the eager Mega team at arm’s length, Dotcom could only see common sense in some sort of deal. He wanted to turn the infringing links into an opportunity to make money, diverting traffic attempting to download infringing material to an MPAA-approved website where they could buy it. “We had great ideas for them,” said Dotcom. “So let’s say Hollywood identifies the Terminator 2 movie. Their team has taken it down from Megaupload. By providing us with a content ID . . . we know what it was and we link to the site where they sell it legitimately. They weren’t interested in that — can you believe that? We were going to give them so much traffic so they could sell this stuff and they didn’t do it.”

Perhaps one of the reasons why Hollywood and the RIAA kept Megaupload at a distance is because they knew what was coming. Not much later Megaupload was raided, effectively destroying a multi-million dollar empire.

The above are just a few highlights from the book, which is well worth a read for those who want to know more about Dotcom’s life. While the book doesn’t delve deeply into some of the more controversial issues, it is a fascinating read.

“The Secret Life of Kim Dotcom – Spies, Lies and the War for the Internet” is available for sale here, and an Ebook version is available on Amazon.