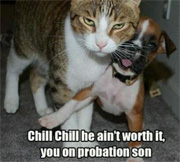 Someone once told me never to go food shopping when hungry, never to argue when drunk, and more recently never to write when angry. Take a deep breath, go for a run, get the aggression out anyway you can first, I was advised.

I’ve done all of that this morning and none of it has worked. In fact, I might be even more fired up than before. This website blocking nonsense that is beginning to pollute the Internet has gone way too far and is becoming my sworn enemy.

Here at TF we’ve long been opponents of website blocking. It’s a blunt instrument that is prone to causing collateral damage and known for failing to achieve its stated aims. We recently discovered that thanks to Sky’s Broadband Shield filtering system, TorrentFreak is now blocked on one of the UK’s largest ISPs by users who think they are protecting their kids.

Our crimes are the topics we cover. As readers know we write about file-sharing, copyright and closely linked issues including privacy and web censorship. We write about the positives and the negatives of those topics and we solicit comments from not only the swarthiest of pirates, but also the most hated anti-piracy people on the planet.

If the MPAA, RIAA, FACT, BPI, RightsAlliance, BREIN and every DMCA takedown company on earth want to have their say they can do that, alongside the folks at The Pirate Bay. We won’t deny anyone their voice, whether it’s someone being raided by the police or the people who instigated the raid. Getting the news out is paramount.

We are not scared to let anyone have their say and we embrace free speech. But apparently the people at Sky and their technology masters at Symantec believe that we should be denied our right to communicate on the basis that we REPORT NEWS about file-sharing issues.

Symantec write about viruses and malware ALL THE TIME, so are they placed in the malware and virus category? Of course not. Thanks to their very own self-categorization process they wear the “Technology and Telecommunication” label. Is their website blocked by any of their own filters? I won’t even bother answering that.

Examining other sites helpfully categorized by Symantec and blindly accepted by Sky reveals no more clarity either. UK ISP Virgin Media runs its own Usenet access, customers can find it at news.virginmedia.com. From there it’s possible to download every possible copyrighted movie and TV show around today, yet that service is listed by Symantec as a “Technology and Telecommunication / Portal” site. Download.com, possibly the world’s largest distributer of file-sharing software, is also green-lighted through.

Are you kidding me?

Thanks to Ernesto’s annual ‘most-pirated‘ charts we have been cited countless dozens of times in the past few weeks by fellow news resources all over the Internet. Yet Sky users who are “protecting their children” find that when they try to follow the link to the source of those stories they are effectively informed that TorrentFreak is unsuitable for anyone under 18. What does that do for our reputation?

As an earlier statement from Sky points out, the parental filters can be modified to let certain sites through, TorrentFreak.com included. However, when someone in a family asks the account holder for a site to be unblocked (they are the only person who can do that), why would they do so when Sky and Symantec make it very clear on their block screen that we are a file-sharing site? Who will most people believe, a teenager or a “respectable” corporation that cares so much about kids? Furthermore, what are the chances that the account holder even remembers how to turn filtering off once the initial ‘default on’ settings are accepted?

There can be little doubt that little by little, piece by piece, big corporations and governments are taking chunks out of the free Internet. Today they pretend that the control is in the hands of the people, but along the way they are prepared to mislead and misdirect, even when their errors are pointed out to them.

I’m calling on Sky, Symantec, McAfee and other ISPs about to employ filtering to categorize this site correctly as a news site or blog and to please start listening to people’s legitimate complaints about other innocent sites. It serves nobody’s interests to wrongfully block legitimate information.

And to Sky, please don’t try pretending that you’re actually trying to stop file-sharing with your parental controls, because if you really meant business you would have blocked the actual protocols, not merely some websites. But that would cost you money in customer churn, and we obviously need to avoid that at all costs.