Interview with Bram Cohen, the inventor of BitTorrent

TorrentFreak: What is the best thing about your job at BitTorrent Inc? 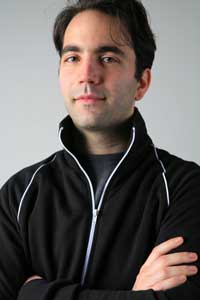 Bram Cohen: I really enjoy making products which I personally want to use, and like to empower people to do things they couldn’t do without BitTorrent’s efficiency and reliability. I also enjoy working with my team. We’ve recruited a really talented group of engineers from the P2P community and the tech industry, as well as some of the best business people in Silicon Valley. Together, we’re taking BitTorrent to new heights while still remaining true to our original goal of delivering content to the masses.

TorrentFreak: How do you see the future of BitTorrent Inc, what will its core business be?

Bram Cohen: We have two core businesses. We have a content delivery service to power websites which have downloadable and streaming objects on them, and we also have an entertainment destination at BitTorrent.com which will allow consumers to both publish and download high-quality digital content. Professional publishers have licensed over 5,000 downloadable video, music and game files, some of which will be free, and some for rent or purchase. We expect our network to be very prominent and an extension of our well-known brand.

TorrentFreak: Are there still “puzzles” that need to be solved to improve the BitTorrent protocol?

Bram Cohen: I had lunch with Vint Cerf at Google last week, and we discussed this at length. BitTorrent is a mature protocol at this point, but there are still a number of interesting things to work on. For example, improving tit for tat, making seeding optimizations for enterprise use, and trying to figure out if there’s any good use for error correcting codes. Regarding that last one, it turns out that there are, but most of the academic work has been barking up the wrong tree. We also have a great testing environment built, so we can test the impact of protocol extensions on real, live swarms, which is critical when making enhancements that benefit the BitTorrent community at large.

TorrentFreak: More and more ISPs have started to throttle BitTorrent traffic. How do you feel about this, especially related to the upcoming BitTorrent video store?

Bram Cohen: ISPs have historically thought that all P2P traffic is illegal, which most definitely is not the case today. Identifying traffic as BitTorrent versus http is a very poor proxy for determining legal versus illegal. Even more so as content creators have begun using our self-publishing service to distribute their own work and major studios have signed up because they recognize the enormous potential of BitTorrent as a sales channel.

Legal traffic is growing within the P2P ecosystem and piracy also travels with HTTP and FTP in high volumes. ISPs have to invest in making their networks better and faster rather than stifling applications which consumers use and love. That’s just bad marketing and customer service, especially given the competition which exists in the broadband industry and consumer focus on network neutrality. For instance, in Japan and Korea, consumers currently enjoy true all-you-can eat symmetric fiber-to-the-home at 100 mbps. That’s a great environment for P2P development to make the Web a truly powerful medium for on-demand media, with broadcast economics. Of course, it also leads to the question: Why is the United States two generations behind?

TorrentFreak: What would you advise BitTorrent users to do, when they find out that their ISP is throttling BitTorrent traffic?

Bram Cohen: Switch. Competition is the best thing for the consumer. If you’ve got a couple of options, try the alternatives. If you have no alternatives or both alternatives suck, call customer service. And call them a lot. It turns out that angry customers are more expensive to ISPs than providing unadulterated access to popular applications and websites.

TorrentFreak: The mainline client now supports encryption, but there are no settings to control this (correct me if I’m wrong). Does this mean that the client encrypts all transfers?

Bram Cohen: No. The mainline client accepts incoming encrypted connections, but makes unencrypted outgoing connections by default. We added support for that primarily for our users in unfriendly ISP environments. As I’ve said before, protocol encryption is at best a temporary hack around ISP rate limiting, until identification techniques are put in place which use transfer patterns rather than packet inspection to identify traffic. There are better approaches to evade traffic shaping, although we’re still trying to work productively with ISPs, who own the network after all. But if we can’t find a way to work together to provide a better experience for BitTorrent users, then the arms race will begin.

TorrentFreak: You said before that you’re not a big fan of encryption. What would you suggest as an alternative?

Bram Cohen: I say just leave things in the clear, and try to use caching technology to improve the ISP network. Or better yet, ISPs should lay more fiber and build bigger pipes.

The so-called ‘encryption’ of BitTorrent traffic isn’t really encryption, it’s obfuscation. It provides no anonymity whatsoever, and only temporarily evades traffic shaping. There are better approaches to obfuscation, and I’ve got a great team of engineers who are quite eager to fight that battle, but I’m hoping that everything can be resolved amicably without getting into a serious arms race.

TorrentFreak: What was the main reason behind the acquisition of uTorrent?

Bram Cohen: uTorrent has both an impressively clean codebase and large user community, although we were already working on our own C++ implementation. Moving forward, you’ll see announcements related to BitTorrent being embedded on silicon and on non-PC hardware thanks to the new C codebase we have (based on uTorrent and our protocol extensions).

TorrentFreak: Are their plans to remove any of the present features uTorrent has?

Bram Cohen: No, uTorrent users are quite happy with it, and we wish to keep things that way. In fact, be on the lookout for a Mac and Unix port, which we have the resources to do thanks to the size of our engineering team.

TorrentFreak: What will happen to the mainline client in the future?

Bram Cohen: Our mainline extensions and uTorrent’s will converge. However, we are still committed to offering an open source BitTorrent reference implementation.

TorrentFreak: Will the uTorrent client be integrated into the BitTorrent Video Store?

Bram Cohen: We’re going to launch our entertainment network with support for whichever BitTorrent client the user wishes to install.

TorrentFreak: Can you give us any details on the pricing of the products in the BitTorrent Video Store, and the quality of the video files?

Bram Cohen: We haven’t announced any firm pricing yet. The video quality will be the best possible with the available codecs. In addition to being a “store,” our site will be a destination for publishing and discovering digital entertainment, and will have plenty of free files in addition to the pay ones.

TorrentFreak: You said before that some of the content from the video store will be “protected” by Windows DRM. What is your personal view on DRM, do you see other, more user friendly alternatives?

Bram Cohen: Right now most of our content partners are insisting on DRM for the content we’re making available. It’s causing an awful lot of headaches, but we’re trying to minimize the impact on user experience and support.

TorrentFreak: Over the past year we’ve heard quite a lot of rumors about the arrangement between BitTorrent and the MPAA. Can you tell a little more about the nature of this agreement?

Bram Cohen: We support keeping copyright infringing material off of our site, and have deals with most of the MPAA member companies to make their content available through our entertainment network. The MPAA is actually a lot less of a hive mind than many people think. We’ve had to negotiate individually with each member company regarding business deals. We don’t currently have any investment from any of them.

TorrentFreak: Several other BitTorrent sites like mininova.org and torrentspy.com have the exact same policy, and remove infringing material whenever they are asked to. Though, they are often seen as the bad guys. The MPAA even sued torrentspy and isohunt, and refuses to start a dialogue, while they index the same torrents and bittorrent.com does. What’s your opinion about this?

Bram Cohen: It’s easy to make the mistake that thinking the exact letter of the law is all that matters in such situations. I have no legal opinion of what mininova and torrentspy are doing, since I’m not familiar with the exact details. But being antagonistic will result in predictable outcomes, regardless of how well defended one thinks one is legally.

TorrentFreak: Due to the arrangement with the MPAA most people might think that most of the content they search for on bittorrent.com is legal. However bittorrent.com does index a lot of copyrighted work. Don’t you think this might confuse some of the users of the site?

Bram Cohen: We’re cooperating to get copyrighted work out of our search index, and when our new site launches, much more emphasis will be placed on the self-published and licensed content within our own index, instead of the general Web search.

TorrentFreak: In March the MPAA urged the Swedish government to take down the site because it is linking to infringing material. bittorrent.com indexes the torrents from thepiratebay.org , a site that is often referred to as “Pirate Heaven”. Has the MPAA ever asked BitTorrent Inc to stop indexing The Pirate Bay?

Bram Cohen: The focus of takedown notices has primarily been on particular pieces of content, not so much where they came from.

TorrentFreak: Is there a future for BitTorrent in the development of streaming online content. For example, would it be possible for video streaming sites like YouTube to use (a modified version of) BitTorrent?

Bram Cohen: Yes, we’ve developed a streaming version of BitTorrent. Stay tuned for more details around the middle of this year.

TorrentFreak: BitTorrent is slowly starting to replace the video recorder, especially among younger people. Popular episodes of TV shows like LOST are downloaded (illegally) more than 500,000 times in just one week over BitTorrent. These figures clearly show the potential that BitTorrent has, and it’s an indication that TV as we know it is about to change. Do you think BitTorrent Inc can play a role in the future of TV? And what kind of product or business model do you think could compete with these pirated shows?

Bram Cohen: Our new site will launch with thousands of movies and TV shows, so yes, we clearly have a role in the future of video. As far as competing with the piracy experience, the better consumer experience we provide, the less people will feel the need to rely on piracy. To do that, we’ll be providing an extensive and valuable catalog of content at a good price. In the future, we’ll expand into free, ad-supported content as an integral part of our site. We’re also going to give independent publishers a platform to distribute, promote, and ultimately sell their own content as part of that experience.

TorrentFreak: If you look back at the past 5 years, what is the thing you’re most proud of?

Bram Cohen: Looking back at the past 5 years, I can still say that I’m proud of getting BitTorrent to work in the first place. When I first started working on it, nobody knew whether it was possible to overcome all the logistical problems of handling a flash crowd. It was challenging, but not only did I get it to work at all, but got it to work extremely efficiently. More recently, I’m proud of being part of the team that has worked hard to convince content publishers and enterprise businesses that unlike other p2p architectures, BitTorrent is a legitimate and incredibly powerful tool for content delivery.

TorrentFreak: Thanks for taking the time to answer these questions!