The ongoing dispute over how best to handle the illegal file-sharing of music, movies and TV shows prompted the now famous AFACT v iiNet legal battle. In late February the Full Bench of the Federal Court in Australia dismissed the movie industry’s appeal against last year’s judgment which found that ISP iiNet did not authorize the copyright infringements of its customers.

However, once the detail of the ruling had been absorbed it became apparent that had the movie and TV industries done more to improve the quality of their infringement notices, the decision in the case could have tipped in their favor.

Neither iiNet nor the studios want their opponent’s choice of system to be imposed on them – their prolonged legal battle showed that – but it’s fairly clear that at some point a compromise of sorts will have to be reached. Today, iiNet was the first to produce a report containing what it says are the steps forward.

Titled ‘Encouraging Legitimate use of Online Content’ the report begins with the ISP’s earlier stance that in order to tackle piracy the studios have got to meet demand. Having created a product and generated desire in the market place, the report argues, the studios then limit supply with their ‘windowing’ strategy, causing frustration in the market. The message is clear – once the product is available, get it out there to the customers.

The report goes on to note that despite making the product available in a timely and convenient fashion, some people will continue to pirate media. iiNet proposes a system to deal with these individuals to be overlooked by an independent body. 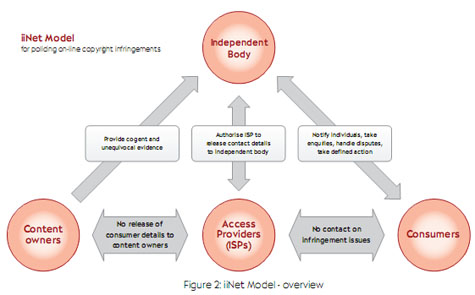 “iiNet has developed a model which addresses ISP concerns but one we think remains attractive to all participants, including the sustainable strategy of an impartial referee for the resolution of disputes and the issue of penalties for offenders,” said iiNet chief Michael Malone, as quoted by Delimiter.

While offering subscribers a level of protection and outright rejecting disconnecting them from the Internet, iiNet proposes that infringers are punished within a drivers’ licence-style penalty points system.

“As with speeding fines, a low level infringement might attract a limited penalty, but then can ramp up to more serious penalties, depending on the level of infringement. The seriousness of the penalty is determined by a margin over a regulated limit,” says the report.

Continuing with the traffic/infringement analogy, iiNet says that offenses could attract “demerit points and/or fines”, the former set to expire after a set time and for single infringers, back to a clean slate.

The report suggests that infringements could be classified as ‘minor’ for a single instance, ‘major’ for multiple instances on different files, ‘serious’ for those on a ‘commercial level’ and all with their own level of penalties. But of course, proposals like this can be easily distorted by the entertainment industries.

For example, if a subscriber seeds a single torrent containing an album with multiple tracks on and off over the course of a month, is this ‘major’, i.e multiple instances on different files? If a subscriber seeds a single track in a swarm of 1,000 peers, is this ‘commercial level’ infringement? These all-important details and the disagreements they generate are what lead to prolonged legal battles.

Furthermore, iiNet suggests the establishment of a “scale of fines” could be linked to “the economic loss represented” which, in the light of some of the ridiculous and sometimes strangely mysterious reports coming out of the industry lately, is likely to make subscribers shudder with fear.

Fines could also be supported by demerit points imposed against the subscriber’s account and “when a defined limit is reached, other sanctions might be deemed appropriate.”

“These could involve charges being laid for treatment by the courts or possibly shaping of peer to peer traffic,” iiNet suggests.

To overcome the problem of subscribers being punished for the actions of others within a household, iiNet implies that the bill payer – as with individuals whose cars have been identified by cameras as committing speeding offences where they weren’t the driver – could have the option of accepting a fine or identifying the infringer so that they may be punished instead.

It will be very interesting to see what counter proposals are made by AFACT who are yet to comment on this report.

The full iiNet proposal can be downloaded here.