Initiatives to punish alleged copyright infringers after repeated warnings are popping up all over the world, most recently in the United States. In the UK a similar scheme is embedded in the Digital Economy Act despite strong opposition from ISPs, the public and various human rights groups.

The entertainment industries claim that the threat of losing one’s Internet connection will deter a large group of copyright infringers. Thus far, however, no research has backed up this prediction. On the contrary, the results of a recent survey conducted by the British Internet provider BE Broadband reveals that the impact might be far less than expected.

BE Broadband surveyed a few hundred customers and asked them whether they are aware of the Digital Economy Act, and how they think their file-sharing habits would change under the new law. The results are intriguing.

Of all the respondents who use file-sharing networks (85% of the total sample) more than 94 percent say they will not share less when the Digital Economy Act gets into full swing. Instead, the majority of the file-sharers say they will simply take measures to hide their IP-address, by using VPN and proxy services for example.

Roughly 1 percent of the people who share files now say they will stop doing so and about 5 percent claim they will reduce their use of file-sharing software. Needless to say, the survey results suggest that three-strikes measures can hardly be called effective. 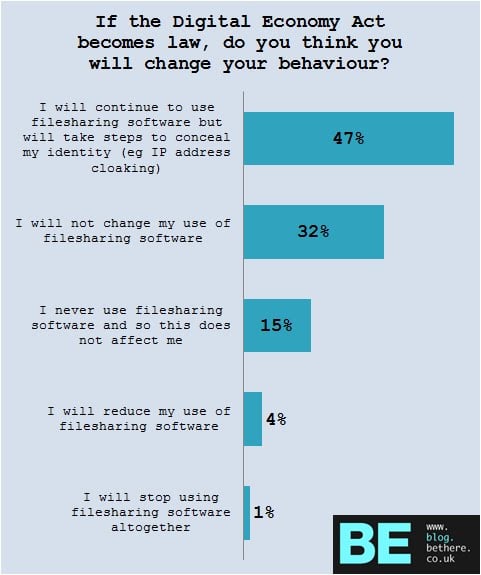 Taking into account that the survey may not be representative of the general population in the UK (judging from the high percentage of file-sharers), it does appear that many of the people who now use file-sharing networks won’t be deterred from doing so under the new law. Instead, many of them will simply take measures to ensure that they’re not caught.

This raises some serious concerns.

Although the entertainment industries may argue that even a few percent less copyright infringers is a victory, the question of costs remain. Implementing the three strikes procedures will cost ISPs millions of pounds a year, money that will be eventually clawed back from consumers.

In addition, the three strikes scheme puts tens of thousands of innocent Internet users at risk of being wrongfully accused and disconnected by mistake. This has been demonstrated several times in the ACS:Law debacle, and was even reported on in the British mainstream media.

Last but not least, even if the right person is targeted then there’s still the human rights issue. A UN report published last month labeled the three strikes provision in the Digital Economy Act a breach of human rights. Disconnecting users from the Internet is a disproportionate penalty, the report concluded.

Perhaps it’s time for the copyright lobby and legislators to look at the alternatives. Preferably measures that improve the legal offerings and take away the incentive for people to pirate, rather than radically enforcing copyright infringement without knowing that it will have any effect at all.