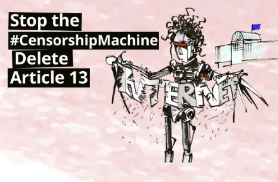 September 2016, the European Commission published its proposal for a modernized copyright law. Among other things, it proposed measures to require online services to do more to fight piracy.

Specifically, Article 13 of the proposed Copyright Directive will require online services to track down and delete pirated content, in collaboration with rightsholders.

The Commission stressed that the changes are needed to support copyright holders. However, many legal scholars, digital activists, politicians, and members of the public worry that they will violate the rights of regular Internet users.

Last month the EU Council finalized the latest version of the proposal. This means that the matter now goes to the Legal Affairs Committee of the Parliament (JURI), which must decide how to move ahead. This vote is expected to take place in two weeks.

Although the term “filter” is commonly used to describe Article 13, it is not directly mentioned in the text itself.

According to Pirate Party Member of Parliament (MEP) Julia Reda, the “filter” keyword is avoided in the proposal to prevent a possible violation of EU law and the Charter of Fundamental Rights. However, the outcome is essentially the same.

In short, the relevant text states that online services are liable for any uploaded content unless they take “effective and proportionate” action to prevent copyright infringements, identified by copyright holders. That also includes preventing these files from being reuploaded.

The latter implies some form of hash filtering and continuous monitoring of all user uploads. Several companies, including Google Drive, Dropbox, and YouTube already have these types of filters, but many others don’t.

A main point of critique is that the automated upload checks will lead to overblocking, as they are often ill-equipped to deal with issues such as fair use.

“The proposal would require platforms to filter all uploads by their users for potential copyright infringements – not just YouTube and Facebook, but also services like WordPress, TripAdvisor, or even Tinder. We know from experience that these algorithmic filters regularly make mistakes and lead to the mass deletion of legal uploads,” Julia Reda tells TF.

“Especially small independent creators frequently see their content taken down because others wrongfully claim copyright on their works. There are no safeguards in the proposal against such cases of copyfraud.”

Besides affecting uploads of regular Internet users and smaller creators, many businesses will also be ‘hit’. They will have to make sure that they can detect and prevent infringing material from being shared on their systems.

This will give larger American Internet giants, who already have these filters in place, a competitive edge over smaller players and new startups, the Pirate Party MEP argues.

“It will make those Internet giants even stronger, because they will be the only ones able to develop and sell the filtering technologies necessary to comply with the law. A true lose-lose situation for European Internet users, authors and businesses,” Reda tells us.

Based on the considerable protests in recent days, the current proposal is still seen as a clear threat by many.

In fact, the “Save your Internet” campaign, backed by prominent organizations such as Creative Commons, EFF, and Open Media, is ramping up again. They urge the European public to reach out to their Members of Parliament before it’s too late.

“Should Article 13 of the Copyright Directive proposal be adopted, it will impose widespread censorship of all the content you share online. The European Parliament is the only one that can step in and Save your Internet,” they write.

The full Article 13 text includes some language to limit its scope. The nature of online services must be taken into account, for example. This means that a small and legitimate niche service that doesn’t have storing copyrighted works as the main purpose, will not be directly liable if it operates without these anti-piracy measures.

Similarly, non-profit organizations will not be required to comply with the proposed legislation, although there are calls from some member states to change this.

In addition to Article 13, there is also considerable pushback from the public against Article 11, which is regularly referred to as the “link tax.”

At the moment, several organizations are planning a protest day next week, hoping to mobilize the public to speak out. A week later, following the JURI vote, it will be ‘judgment day.’

If they pass the Committee the plans will progress towards the final vote on copyright reform next Spring. This also means that they’ll become much harder to stop or change. That has been done before, such as with ACTA, but achieving that type of momentum will be a tough challenge.