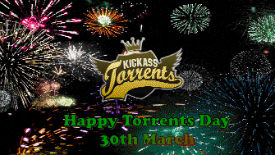 With millions of unique visitors per day KickassTorrents (KAT) has become the most-used torrent site on the Internet, beating even The Pirate Bay.

The site also has a very active community of torrent aficionados from all over the world. On March 30, staff and members come together to celebrate their beloved pastime on ‘Happy Torrents Day‘.

“Five years ago we realized that what our users do on KickAssTorrents, what they believe in and enjoy, needed celebrating. A day to give back to them what they give to us,” KAT administrator Mr. Black tells TorrentFreak.

“Every torrent community is different and individual in its own way but we all believe in freedom of sharing and of course share one of the most important things in common. Torrents.” 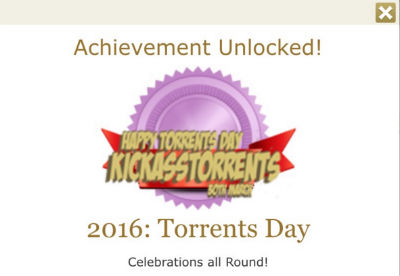 The event was initially started by KAT administrator Mr. Pink in 2011. It began as a small celebration, but over the years it has turned into a recurring tradition with many thousands of people participating.

Last year more than 115,000 registered users checked in. The number of uploads also increased significantly on Happy Torrents Day, well above the 4,000 torrents that were added on an average day that year. This year, the KAT team hopes to break this record.

“Torrents Day in 2015 took us to just short of 6,000 torrents uploaded… 5,775 to be exact. But due to the users we have gained and the services provided we are expecting to well exceed these numbers,” Mr. Black says.

The KAT staff have put together an overview of the various challenges and events. For example, users can add their favorite song to the official soundtrack, or participate in the upload challenge.

If everything goes according to plan Torrents Day 2016 is expected to drive a lot of traffic to the site and perhaps set several new records. Judging from the discussion already going on, there’s definitely plenty of interest for this young tradition.