For a decade, TorrentFreak has produced charts of the world’s most popular torrent sites. These annual lists provide a regular snapshot of a constantly changing and volatile landscape.

Back in 2007, torrent index Mininova was ruling the waves as the world’s most popular torrent site. Notably it became the first site of its kind to break into the Internet’s top 50 sites overall. Almost a decade ago The Pirate Bay was only big enough to take third place.

In 2008, TPB took the lead, pushing Mininova back into second place. A year later TPB was still maintaining the number one slot, followed closely by meta-search engine Torrentz. Meanwhile, a lesser-known site called KickassTorrents was sitting patiently in the wings.

The Pirate Bay was the runaway leader in 2011, posting an Alexa rank of 76, more than 90 places ahead of its nearest rival. But by this time KickassTorrents was closing fast, taking the #4 most popular torrent site slot just behind the original isoHunt and Torrentz.

A year later, KickassTorrents (by now also referred to as KAT) had improved its position yet again. Continuing the trend, in 2013 the site stepped up to take second place behind the mighty Pirate Bay.

For KAT, 2015 would become its most important year to date. After TPB suffered domain issues and an almost catastrophic raid on its datacenter, KAT took the coveted top spot as the world’s most popular torrent site.

At this point a much lower Alexa rank of 151 was enough to do the job but KAT kept its foot on the gas, building up to rank 85 by the start of 2016. However, in keeping with its meteoric rise, KAT still wasn’t done. This week the site entered the Alexa top 70, quite possibly the only torrent index to do so since Mininova in 2007.

So what’s KAT’s secret? That isn’t a question easily answered but it’s clear that the people behind the site really know what they’re doing. On a basic level the site’s uptime is impressive, especially given the difficult nature of running a torrent index. It also carries a massive library of torrents that somehow manages to remain useful despite the site complying with thousands of DMCA notices.

But while many other sites progress by doing the basics well, KAT goes much further. Firstly, it’s a very good looking site while also being easy to navigate. It has a good search engine. It’s quick to load. In fact, it does everything one would expect of a good regular website. As a result it’s relatively rare to hear users complain.

And that brings us to the special sauce that few other sites in this niche can offer.

Largely thanks to the way the site is designed, KAT has developed perhaps the best torrent-based community publicly available on the Internet today. The site’s forums are buzzing with the kind of activity one used to see on dedicated file-sharing discussion platforms back in 2005. Most of those have long since died out but somehow the Kickass community is thriving with the same spirit a decade on.

Of course, there are always a few rotten apples out to spoil the barrel, but KAT’s community is largely comprised of people seeking to help others. Comment is generally constructive and those who step out of line are swiftly dealt with. That, coupled with KAT’s special achievements awards (think Xbox achievements but for torrents), people are incentivized to contribute, thereby making the site better for all involved. 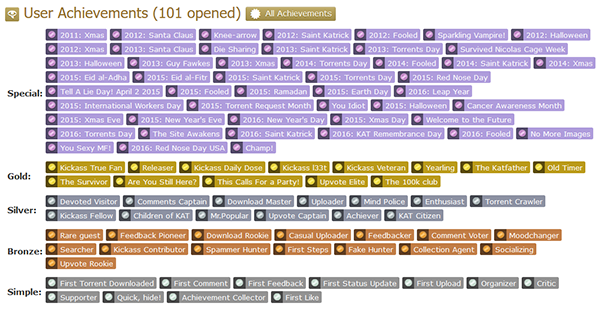 So for now, KickassTorrents is not only the world’s most-visited torrent site in the public space, it’s probably the most enjoyable one to use too. Additionally, KAT not only facilitates access to content but also provides an excellent social platform for its users. That means people feel at home when on-site and miss it when they’re away – even when they have nothing to download.

Moreover, Kickass makes users feel at home and when people feel at home, they look after what they have. The resulting loyalty is a recipe for success, and there’s no sign that the site’s popularity will fade anytime soon.