Kim Dotcom and MEGA Ratchet Up War of Words

Last week we reported on what appears to be serious animosity between Kim Dotcom and the company he founded, MEGA.

Just three years ago the MEGA file-hosting platform was the apple of the Megaupload founder’s eye, but for reasons best known to the warring parties, that warmth has turned to aggression.

Dotcom has previously made derogatory statements about MEGA, a company he no longer has a stake in, but last week’s outburst was unprecedented.

Referencing comments made by New Zealand Prime Minister John Key that key MEGA shareholder Bill Liu is close to the top of China’s extradition list, Dotcom described the businessman as the “5th most wanted criminal in China”.

Adding that MEGA has diminishing ways to process payments from customers, Dotcom hinted towards impending doom and warned users to back up their files.

“Mr Liu has a shareholding interest but has no management or board position so he certainly doesn’t control Mega,” Hall said.

“This year, MEGA has already committed 24 PB additional storage capacity to service our 40 million registered users, and we will continue that expansion,” the company later added. “MEGA users are able to pay subscriptions through a variety of methods, depending on their country of residence.”

Over the weekend, however, things got much more personal. First MEGA attacked Dotcom’s political ambitions with the Internet Party, noting that the endeavor had “badly damaged his credibility with the New Zealand public.” Now, in a surprise twist, MEGA is claiming that Dotcom tried to reinvest money in MEGA as late as last year.

“In 2015 the [Dotcom] family trust twice subscribed for new shares in MEGA. In December 2015 Mr Dotcom applied to the New Zealand Court for approval to personally borrow $0.7 million for his family trust to subscribe for further shares in MEGA. The Court declined approval. Since then he has made negative comments about MEGA that have no factual basis,” MEGA says.

Finally, in a clear attempt to discredit Dotcom’s predictions that it’s only a matter of time before MEGA folds, MEGA’s operators published many of Dotcom’s earlier tweets in which he heralded the arrival of MegaNet, a non-IP address based network utilizing blockchain technology.

Just two are shown below, with each already crossed out in red by MEGA. 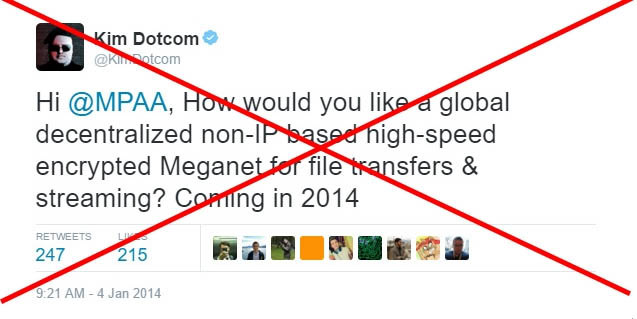 “It is good practice to have a backup of your files but we strongly disagree with Dotcom’s scaremongering. If you follow his tweets about ‘MegaNet’ you may have less confidence in his predictions,” MEGA says.

But not even that was to be the end of the matter. Responding in a serious of tweets over the weekend, Dotcom stuck by his guns – and turned up the pressure.

“What I’ve shared with you about Mega is true. Mega is losing $1 million per month. No credit card processing = no business. #BackupYourFiles,” he said.

“Mega CEO in December admitted to me that Bill Liu controls Mega. The 5th most wanted criminal in China controls board & puppet shareholders.”

It’s a somewhat unprecedented situation to have two men, Dotcom and Liu, connected to a single company while both being wanted for extradition by powerful foreign governments. Still, Dotcom says he’s clear why he’s attacking MEGA in public.

“Why do I care? I founded Mega,” he continued. “On-the-fly file encryption was my idea. I asked you to join Mega. It’s my obligation to warn you now.”

Only time will tell if Dotcom’s predictions will come true but in the meantime his advice (and that of MEGA) is clear. Keeping backups of files wherever they are is extremely important – the Megaupload fiasco should have underlined that.