Kim Dotcom: Mega Search Engines Have to Play by the Rules

Yesterday a flurry of bogus DMCA notices made thousands of Mega files unavailable to the public. The actions appeared to be targeted specifically at Mega search engine Mega-Search.me.

At first it was unclear who was behind the actions, but Kim Dotcom admits today that Mega took action against the French site because is wasn’t playing by the rules. Many of the takedown notices weren’t real, Mega was simply removing all links on the site, legal or not.

Talking to TorrentFreak, Dotcom explains that Mega was concerned about the massive press attention the search engine received, with articles often focusing on the many copyrighted files that were indexed. In addition, Mega also received complaints from rightsholders about the search index.

The above triggered Mega to force Mega-Search out of business, proactively. Mega justify their actions by pointing out that Mega-Search.me didn’t play by the rules.

Firstly, it didn’t have its own takedown procedure but simply linked to Mega’s. And on top of that the site used Mega’s logo as well as a similar design which may lead the public to think that it was affiliated with Mega.

In hindsight Dotcom admits that Mega’s response to the situation, which was decided when he was asleep, might not have been ideal. Dotcom apologizes to the users whose legal files are still locked and said he would have approached the situation differently.

“I would have preferred to send the mega-search.me guys a warning and say: put up a takedown procedure that allows third parties to remove links from your index, remove the Mega branding and just be a good corporate citizen that cooperates with rightsholders,” Dotcom tells TorrentFreak.

In part the panicky reaction was motivated by complaints from copyright holders.

“We have had some emails from rightsholders that said ‘these guys don’t even have a takedown procedure, what are you doing about that?’ When we are faced with a situation like this, then we have to act,” Dotcom told us.

Added to that, dozens of news sites that reported on the “infringing” nature of the site.

“If it’s right in front of our face and it’s put to us so prominently, we have to do something about it. Then we are in a state of knowledge and legally required to act.”

However, search engines and indexes are not banned by definition, as long as they play by the rules. This means having a proper takedown policy and a design that is not confusingly similar to Mega.

Looking at the future Dotcom says that Mega wont be policing the Internet, but will respond to “rogue sites” if needed.

“You will be seeing us acting aggressively towards sites that try to mimic Mega and use our logos. We’ll also go after sites that don’t have any takedown facilities, because that’s the biggest problem,” he told TorrentFreak.

This means that sites such as FilesTube, who are playing by the rules, shouldn’t be too worried. FilesTube is currently the largest Mega search engine out there, indexing thousands of links. 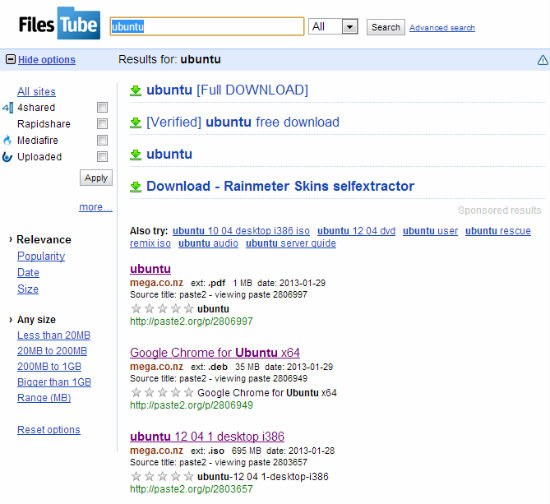 FilesTube crawls the Internet for links to Mega files and adds these to their search engine. Although Mega deliberately blocks Google from indexing its site, search engine crawlers can spot links that are posted on blogs and other websites.

In a blog post Mega suggests that users are advised not to share files in public, but Dotcom says that this is not the case. People can share whatever they want as long as the files don’t infringe any copyrights.

Mega, meanwhile, hopes to put its focus on improving and expanding their service. Millions of files are added every day and in a few days Mega’s bandwidth consumption will exceed that of New Zealand.

“The site has been growing massively, we have a few million users and over 60 million files. Next week we will be pushing more bandwidth than the whole country of New Zealand,” Dotcom says.