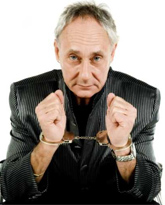 The company has previously had a couple of shots at putting together a scheme to extract cash settlements from alleged file-sharers in the UK, but the latest has its roots in 2011.

The complex battle, which first went to the High Court then to the Court of Appeal, was finally settled in late December 2012 after a failed Open Rights Group challenge.

Golden Eye originally had around 9,000 IP addresses to match with the identities of account holders at ISPs O2 and BE, although how many of these will match with records at the ISPs remains to be seen. However, the ISPs have clearly matched several hundred so far since Golden Eye have already begun their campaign.

Last evening several worried individuals contacted TorrentFreak saying that they had received letters from Golden Eye asking them to settle a copyright infringement claim. Out of the four people we spoke with two said they had been taken by surprise and were totally innocent.

One individual was able to send us a copy of the letter he received. It contains an alleged date of infringement in the first half of 2011, more than 18 months ago.

“This letter assumes that you, as the Internet account holder at your address, were the
user of the relevant computer on the day and time in question,” the letter states, an assumption that cannot be backed up by any evidence.

Indeed, Golden Eye claims in their letter to have included an evidence report from their “forensic computer analyst”. Actually only a film title, IP address, plus date and time of the alleged infringement are included.

Despite the weak evidence, Golden Eye still hope that their targets will roll over and admit guilt.

“Please state whether you admit that you have downloaded the Work and/or made it available for download by others and if so the extent to which you have done so and whether you are prepared in principle to enter into a settlement of the kind outlined above,” they write.

“If you deny that you have downloaded the Work or made it available for download by others, please explain the basis upon which you deny it, and provide the information that we have requested above about other users of the computer.”

Letter recipients should note they have no obligation to incriminate anyone else, it is up to Golden Eye to prove who carried out the alleged infringements.

Speaking with TorrentFreak earlier today, Saskia Walzel of Consumer Focus confirmed that Golden Eye have indeed been sending out letters this week.

Consumer Focus told us it was worth checking whether Golden Eye’s actual letter is the same as the letter approved by the High Court last year. TorrentFreak checked and some minor details aside the letter does appear to be the same.

So, what should recipients of letters be doing? We briefly spoke with a lawyer familiar with these cases whose initial and crucial advice was to “stay calm and admit nothing.”

Consumer Focus are also clear on their chosen approach.

“It’s really important that people contact Citizens Advice and respond [to the allegations],” Saskia explained, adding that the charity now has detailed scripts on how to deal with these allegations.

Citizens Advice can be contacted on 08454 04 05 06 or people can attend their local Citizens Advice Bureau. Letter recipients can contact TorrentFreak too, you can speak with us in complete confidence.