January this year the U.S. Government shut down Megaupload, but founder Kim Dotcom is not done with the file-hosting business yet.

On the contrary, he is preparing a comeback with a bigger and better version of Megaupload.

Over the past several months Dotcom and his crew have been working hard on the new “Mega” which is scheduled to launch January 19 2013, exactly one year after Megaupload was shut down.

Today Dotcom showed off one of Mega’s new racks, freshly delivered in the past few hours. The rack pictured below holds 720 terabytes of data and is just one of many that will power the new cloud hosting service. 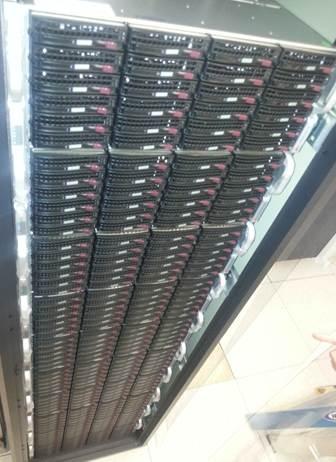 Aside from ordering centrally located servers, the new Mega will partner with hosting providers from all over the world to create a global cloud network. In theory this will make the site more resistant against rogue governments, and will also guarantee optimal speeds for Mega’s users.

“We expect to fill about 20 petabyte per month in the first 6 months and expect substantial growth after the first Mega API apps hit the market,” Dotcom tells TorrentFreak in a comment.

To put this in perspective, during the raid in January the U.S. seized 1,103 servers with 25 petabytes hosted at Megaupload’s main hosting facility Carpathia.

“Mega is filling an enormous vacuum. The demand for truly secure cloud storage and data transfers is huge. Mega intends to lead the Internet privacy battle with numerous innovations over the next two years. Everything from VOIP to video streaming to social networking will be covered by Mega API partners. Power to the people,” Dotcom adds.

In recent months Dotcom has managed to get many people excited about the upcoming Mega release, which will be quite different from the old Megaupload. Last week he told TorrentFreak that Mega is special because it’s the result of everything the team has learned over the years.

“It’s special because seven years of experience have been turned into the perfect cloud storage solution. It scales infinitely. It provides up- and download acceleration and resume in the browser thanks to the latest HTML5 technology,” he said.

One of the breakthrough features, however, is the “military grade” encryption people will use to secure their files. Before a file is uploaded it will be encrypted, which means that no one except the owner can see what it contains.

With this tool Dotcom hope to bring encryption into the mainstream.

“Our easy to use one-click privacy feature will turn encryption into a mass product. We believe within five years half of all Internet traffic will be encrypted with solutions born from our new API,” Dotcom told us.

“I believe in our rights to privacy and legal sharing. I intend to protect those rights when governments are acting in the interest of corporations rather than society and progress,” he added.

Whether the new Mega will live up to the MEGA-anticipation will become clear just a month from now.