Streaming piracy is on the rise with popular media player Kodi at the center of attention.

While Kodi itself is a neutral platform, millions of people use third-party addons to turn it into the ultimate pirate machine.

TVAddons is of the largest repositories of these plugins. The site, which is also the home of FreeTelly, a custom pre-loaded version of Kodi for PC and Mac, is the go-to destination for those who want to upgrade their Kodi experience.

Over the past year-and-a-half, interest in Kodi has skyrocketed, something that’s in large part driven by “pirate” addons. As such, TVAddons has also seen its visitor numbers shoot through the roof.

The site’s latest numbers show how rapidly the platform is growing. Roughly a year ago the repository had about 10 million unique users per month, and last month this number was reached in a single day.

Most of these users aren’t visiting the website. They are people checking in from their devices to see if there’s anything new. Still, the numbers are quite impressive.

The graph below shows that every month more than forty million Kodi-enabled devices with their addons are online, checking for updates. 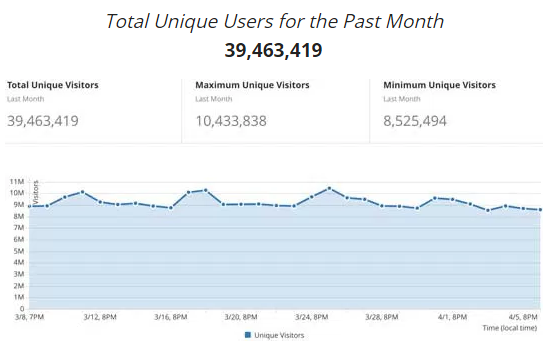 In terms of actual bandwidth used, there was also a milestone reached last month. In total, TVAddons users transferred a petabyte of data from the site, or one quadrillion (short scale) bytes. 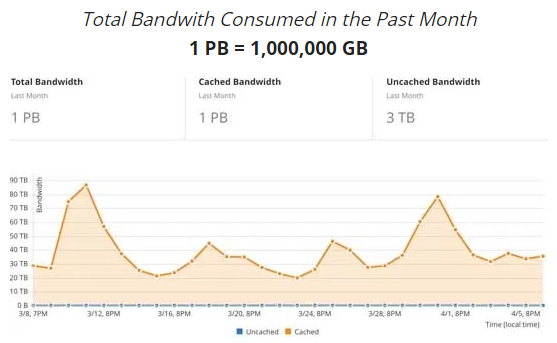 The traffic is divided over a wide array of addons. The site currently lists 1,544 different versions, of which the community-maintained Exodus addon is one of the most popular. How frequently these individual addons are used, remains a mystery though.

TVAddons’ Eleazar informs TorrentFreak that they don’t keep any statistics on the use of individual addons. In part to avoid a competitive atmosphere, but also for privacy reasons.

“We don’t allow addons to keep individual stats. It would turn our open source and positive ‘pay-it-forward’ minded community into a place of fierce competition, which is not part of our principles. It would also be a privacy issue, no one wants their piracy tracked,” he says.

In addition, the site is also doing its best to keep profit-seekers away from its platform. This includes people who are trying to sell paid access to pirated content, including unofficial IPTV suppliers.

“We do not support all these profit-seeking operations like paid IPTV, people selling preloaded Kodi boxes and other stuff. We do what we do for free, for the purpose of sharing and working on our own skills, not so that other people can sell it or try to advertise to our user base,” Eleazar notes.

“We are focusing on creating more addons that allow users to enjoy legitimate content sources in a more organized way. We consider ourselves to be an open source development community, not a piracy site.”

Going forward, TVAddons will focus on improving its current services so that users can have access to media content in the most convenient way possible. By hosting pirate addons, the site itself isn’t particularly liked by copyright holders, but that doesn’t stop the team from moving ahead.

Given the recent growth, the public agrees that the team is on the right path. It will be interesting to see if the repository can keep up these growth numbers. They could easily go up to 100 million unique users this time next year, or down to zero, depending on how the wind blows.